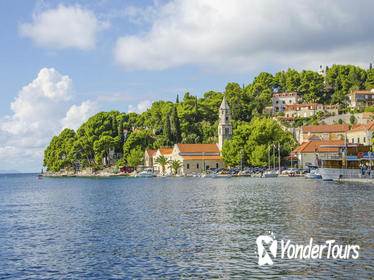 $ 93
5 Hours Private Sightseeing Tours Hotel Pickup Offered Free Cancellation
Discover Dubrovnik and the charming coastal town of Cavtat on this private half-day tour. Spend the morning exploring the highlights of UNESCO World Heritage-listed Dubrovnik Old Town. Wander through the cloisters at the Franciscan Monastery, gaze up at Orlando's Column, and capture postcard-worthy photos of Sponza Palace, the Church of St Blaise and more. Then, soak up the impressive coastal views on route to nearby Cavtat, where you'll enjoy a personalized tour of the 6th-century town.
View Tour 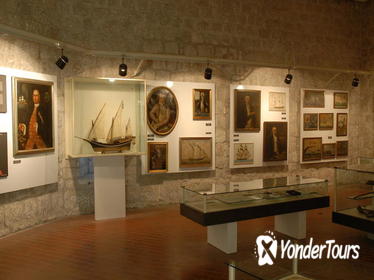 $ 76
3 Hours Cultural Tours Free Cancellation
Dubrovnik may be like a giant stone museum but within its tall walls there are some actual intriguing museums to explore. This guided tour of Dubrovnik's museum's takes you to some places you may have never thought to wander, thus enriching your experience here. Stroll around the medieval Franciscan Monastery, for example, and check out one of Europe's oldest still-functioning pharmacies. Gawk at Renaissance art in the Rector's Palace and learn about the city's rich sailing history at the Maritime Museum, among other museums the guide will take you to.
View Tour 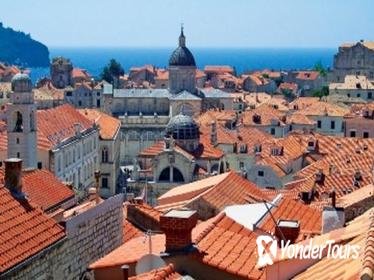 $ 20
1 Hour 30 Minutes Walking Tours Free Cancellation
First timers, even third timers, should not miss this info-packed walking tour of Dubrovnik. Stroll the limestone-covered streets of Old Town, or Stari Grad, with a knowledgeable guide learning the secrets behind the palaces and plazas, cloisters and cathedrals. Start the tour in the morning, the best time of day to walk the streets of the city. Go from the clock tower to the Assumption Cathedral, traversing the entire Old Town while learning about the history of the place.
View Tour 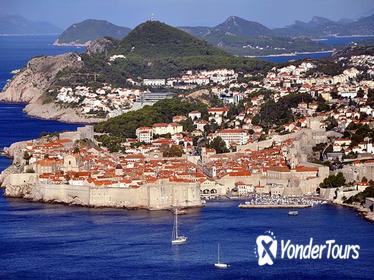 $ 116
11 Hours Private Sightseeing Tours Hotel Pickup Offered Free Cancellation
Dubrovnik is not called the 'Jewel of the Adriatic' for nothing. This full-day guided tour of Dubrovnik and its surroundings starts by weaving through the limestone-paved streets of the ancient Stari Grad, or Old Town, a UNESCO-listed gem. See the main sighs such as the Rector's Palace and the Assumption Cathedral. After, get an unforgettable view of the Old Town from Mt Srā‘ and then sample some locally made wine and edible Dalmatian specialties in the Konavle Valley. Finally, finish the tour in Cavtat and relax on its harbor which has been the site of parked boats for two millennia.
View Tour 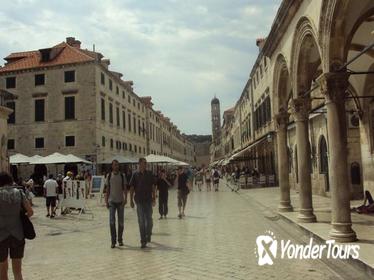 $ 36
4 Hours Private Sightseeing Tours Hotel Pickup Offered Free Cancellation
Get the most out of your time in Dubrovnik by taking this informative and relaxing 4-hour guided panoramic tour of the city. Cruise around town in a comfortable vehicle, stroll the streets of the UNESCO World Heritage-listed Old Town, and then ascend Mt Srā‘ for an eye-poppingly beautiful view of the Old Town and the surrounding Adriatic Sea   -  all while learning about the history and culture of this stunning city.
View Tour 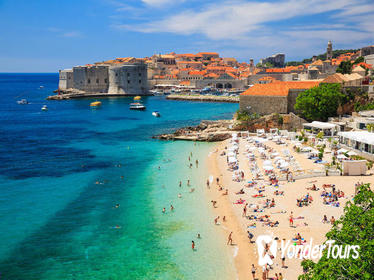 $ 21
1 Hour 30 Minutes Walking Tours Free Cancellation
Depart Dubrovnik with a sense of history and a deeper knowledge of the place with this guided walking tour of the city. Start at Pile Gate and head down the famed limestone-clad street, Stradun, stopping along the way at key points to learn about the Franciscan Monastery, the Sponza Palace, the Rector's Palace and the cathedral, among other sites. Learn about the Serb shelling that took place here in 1991 and see the incredible medieval walls that surround the Old Town.
View Tour 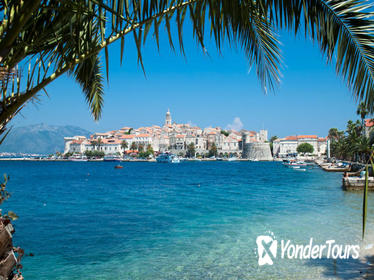 $ 973
7 Days Multi-day Cruises Hotel Pickup Offered
See Croatia in style by island hopping around the Adriatic Sea. This memorable 7-day island-hopping extravaganza of the Dalmatian Coast starts in Dubrovnik, ends in Split and visits a few islands in between. Traverse the islands of Korāula and Hvar, lingering in the ancient villages that are sprinkled around the islands. Learn about the history of each place. Dine on some delicious local dishes. Lounge on the beach and swim in some of the cleanest waters in the Mediterranean. Take walking tours of Dubrovnik, Hvar and Split, plus get hotel accommodation and airport transfers.
View Tour 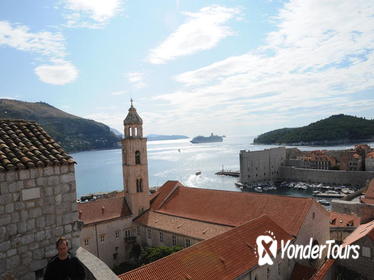 $ 14
1 Hour Walking Tours Free Cancellation
Explore 16th-century history on Croatia's Dalmatian Coast on this 1-hour walking tour of Dubrovnik. Follow your guide on a tour through Dubrovnik's ancient streets and gain insight into the city's colorful past. Discover top sites of interest including Onofrio's Fountains and the Franciscan and Dominican St Saviour Church. Head along pretty Prijeko Street to the Old Port, and learn of the city's trading and maritime endeavors. During your tour, explore Croatia's rich folklore, and hear tales of ancient legend concerning Sponza Palace and Orlando's Column.
View Tour 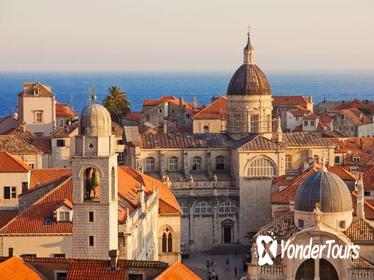 $ 37
3 Hours 30 Minutes Walking Tours Free Cancellation
Learn why Dubrovnik is called the 'Pearl of the Adriatic' on this tour of the city's Stari Grad, or Old Town, and its thick centuries old city walls. See the monasteries and churches, the palaces and the burgher houses, learn the history behind them, and stroll the streets with your guide. Hear about daily life in Dubrovnik during the Middle Ages, as well as, during the battles in the early 1990s. Then ascend to the walls, getting great views of the city and the sea. This Combo is a great way to get two tours - of the city and the walls - at one discounted price.
View Tour 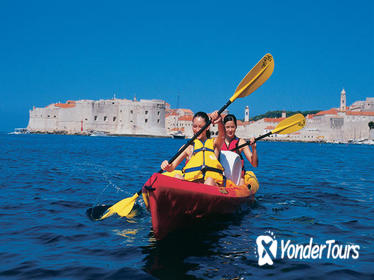 $ 56
1 Day Super Savers Free Cancellation
Combine city sightseeing with a sea kayaking and snorkeling experience on this full-day Dubrovnik Super Saver that saves you 10 percent! Begin the day with a casual walking tour of the city's UNESCO-World-Heritage-listed Old Town, strolling down the limestone-paved Stradun, the widest street in city of narrow lanes, as well as ancient churches and monasteries. Then, hop in a kayak and do some paddling in the azure-colored Adriatic, heading over to the leafy island of Lokrum. This tour is limited to no more than 20 people.
View Tour 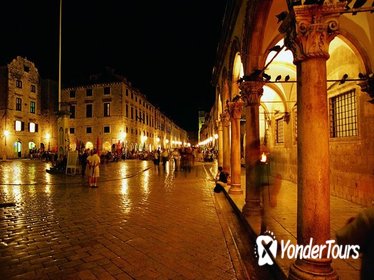 $ 36
1 Hour 30 Minutes City Tours Free Cancellation
Dubrovnik, that pearl of the Adriatic, has more going for it than towering medieval walls, limestone-clad streets, and friendly locals. There are some seriously intriguing stories behind the legends of Dubrovnik. This tour takes you, your very own lantern in hand, through the streets of Stari Grad, or Old Town, scratching the surface of the city to learn what has really made it tick for the last several centuries. Explore Dubrovnik in a different and exciting way.
View Tour 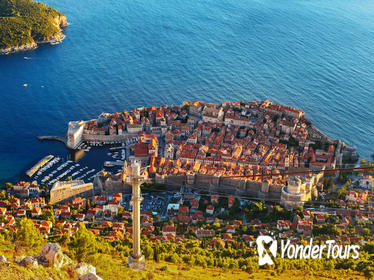 $ 75
4 Hours 30 Minutes Super Savers Free Cancellation
Get more for your money with this Dubrovnik Super Saver that combines a cable car trip up to Mt Srā‘ and a walking tour of the Old Town and the city walls. Ascend up the craggy Mt Srā‘ in the spacious comfortable cable car affording incredible views of Dubrovnik and the Adriatic. Then descend to the Old Town and begin an information-packed walking tour of the UNESCO World Heritage-listed site. Finally, climb up to the walls, strolling along the medieval fortifications while learning about the fascinating history of the city.
View Tour 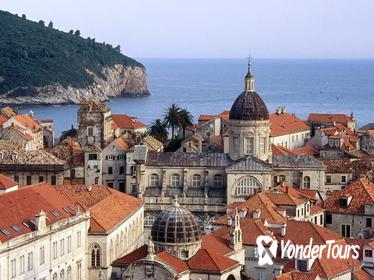 $ 1,150
8 Days Multi-day Tours
See the best of Croatia's mainland with this entertaining and educational 8-day guided tour. The trip begins in Dubrovnik, the 'Pearl of the Adriatic,' and travels north-west along the coast to superlative Split to see the incredible Diocletian's Palace an early 4th-century retirement palace of a Roman emperor, Diocletian. Go on a walking tour through incredible Plitvice National Park with its amazing turquoise waterfalls, and then get history-laden tours of Trogir, Zadar, and Zagreb, the capital of Croatia. Accommodation, transportation, daily breakfast and 5 dinners included.
View Tour 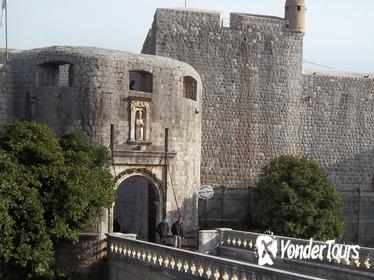 $ 116
3 Hours Private Sightseeing Tours Free Cancellation
Become acquainted with Dubrovnik in a short amount of time with this informative and entertaining 2-hour walking tour of this ancient seaside medieval city. Meet your knowledgeable local guide in the Old Town and stroll around, stopping at landmarks such as the Sponza Palace, the Rector's Palace, the Franciscan Monastery and the cathedral, learning about the city's intriguing history along the the way. Upgrade the tour for an extra hour to meander the incredible city walls or take in a museum or two.
View Tour 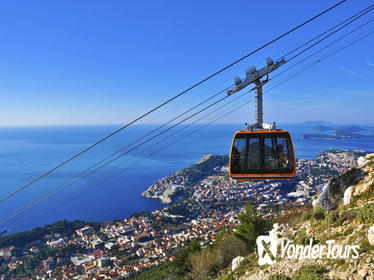 $ 45
3 Hours Half-day Tours Free Cancellation
Get the most out of your stay in Dubrovnik by booking this comprehensive combo out. First ascend via cable car Mt Srā‘, the craggy mountain that towers over the city, for jaw-dropping views of the walled medieval town. Then, head back down and go on a guided walking tour of Dubrovnik, strolling its limestone-blanketed streets and learning about the history of some of its most famous landmarks from St Onofrio's Fountain to the Cathedral of the Assumption.
View Tour 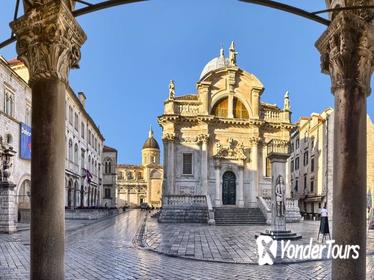 $ 24
4 Hours City Tours Hotel Pickup Offered Free Cancellation
Get an insider's view of Dubrovnik with this informative and entertaining walking tour. After getting picked up at your hotel, make your way to Old Town, as the guide points out landmarks of interest along the way. Begin the walking tour at Pile Gate and then meander down the 'wide' limestone-clad street, Stradun, Old Town's version of Broadway, stopping at the Franciscan Monastery, the city cathedral and Rector's Palace, among others, to learn about the history of each spot.
View Tour