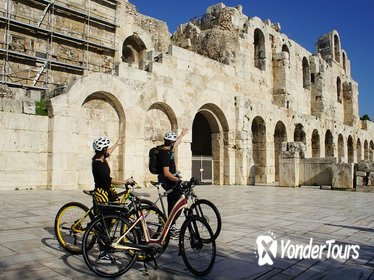 $ 46
2 Hours 30 Minutes Bike & Mountain Bike Tours Free Cancellation
See Athens' essential sites by electric bike on a 2.5-hour, guided tour of the city with an experienced guide. Enjoy the flexibility to ride at your own pace, by pedaling your bike or just zipping along using the electric assist. Trace an all-star route from the Acropolis to the Panathenaic Stadium, a scenic park and historic churches and markets, and continue past the Ancient Theater, the Herodion and the Temple of Olympian Zeus. Get a great overview and orientation of the city that's as active, or relaxing, as you want.
View Tour

$ 57
3 Hours Cultural Tours Free Cancellation
A Tour to local insights and hidden treasures of Athens. The heart of the city, its monuments, its history, its past, stories old and new, legends and myths, Greeks of yesterday, Greeks of today, a magical Athens, the Athens hidden behind the sights.Highlights included among many others: New Museum of Acropolis, Odeon of Herodes Atticus, The Acropolis, Areopagus, Ancient Agora, Hadrian's Library, Roman Forum, Kerameikos, Tower of the Winds, Athens First University History Museum, Plaka, Monastiraki, Thissio, Dorides Telescope.
View Tour 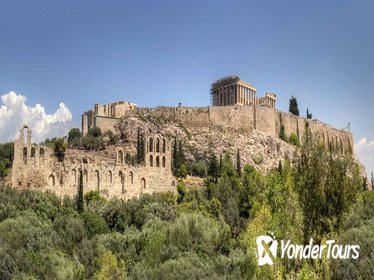 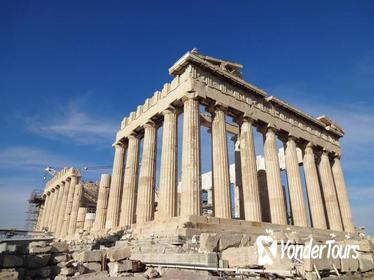 $ 139
10 Hours Full-day Tours Hotel Pickup Offered Free Cancellation
Travel back in time to the thriving empire of ancient Greece on a full-day tour of Athens led by an expert guide. Visit a combination of classic and contemporary sites to gain a holistic picture of the bustling Greek capital; capture photographs of the colossal Panathinaiko Stadium, the venue of the first ever Olympic games; admire the ancient grandeur of the Temple of Olympian Zeus; and browse informative exhibits inside the Acropolis Museum. Gain fascinating insight into the rich legends and myths of ancient Greece during this comprehensive tour.
View Tour 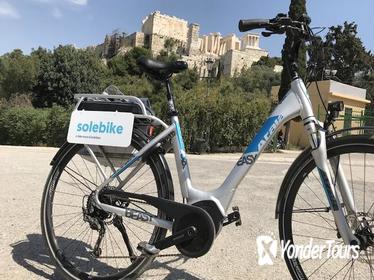 $ 52
3 Hours Bike & Mountain Bike Tours Free Cancellation
Discover the top sights of Athens with ease on a 3.5-hour electric bike tour, led by a local guide. Hop on your electric-powered bike, and make light work of Athens' attractions following a route that's 95% traffic-free. Ride around the Acropolis rock and ancient agora, delve into historical Plaka, see the Bath House of the Winds, and more. Stop to savor a traditional Greek coffee, and learn about the sights via the crystal-clear headset commentary from your guide. Numbers are limited on this small-group tour for a more personalized experience.
View Tour 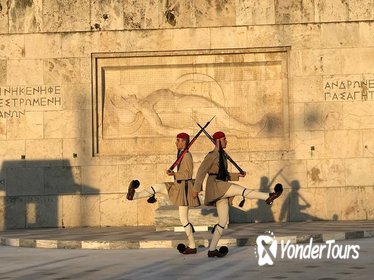 $ 75
4 Hours Bike & Mountain Bike Tours Free Cancellation
Explore the best of Athens with very little effort on this 4 hour electric bike tour. With a local guide, set off by electric-powered bike to discover the Greek capital's ancient and modern highlights. Cruise by the Greek Parliament on Syntagma Square, see the Panathenaic Stadium, and explore historical Plaka and the ancient ruins beneath the Acropolis. Travel much of the way along traffic-free streets, stop to sample tasty Athenian delicacies, and hear about the sights from your informative guide, via the provided headsets. Numbers are limited for a small-group experience.
View Tour 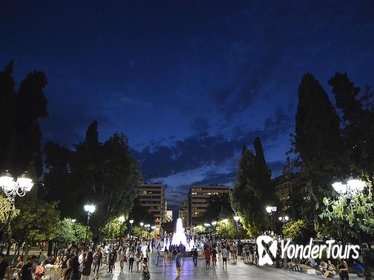 $ 68
4 Hours Walking Tours Free Cancellation
Experience Athens at its most enchanting - as darkness falls - on this 4-hour evening walking tour. Admire views of the illuminated Parthenon and Acropolis and roam the alleyways of Plaka past tavernas filled with cheerful locals. Continue by classical sites bathed in moonlight, such as Ares Rock (Arios Pagos) and the Ancient Agora, and learn about their role during Athen's Golden Age between 500 and 300 BC. Lastly, discover Monastiraki's flea market and join the locals at a bar in picturesque Psyrri, savoring a drink and traditional 'mezedes' appetizers.
View Tour 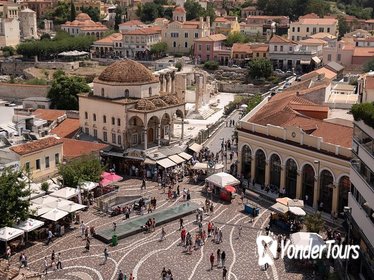 $ 87
3 Hours Cultural Tours Hotel Pickup Offered Free Cancellation
The Tour Scenario: HISTORY. A blaze of glory, a journey of existence. When it all began.A unique, historical semi-private tour experience. The heart of the city sets the pulse, followed by its monuments, its history, myths and legends, its stories old and new, its people, the Greeks of yesterday and tomorrow.Athens, the classical center of times gone by, of today and tomorrow. A three-hour semi private tour for six, led by an expert tour leader ready to share with you his in-depth knowledge, his insights and heartfelt authentic Greek hospitality.
View Tour 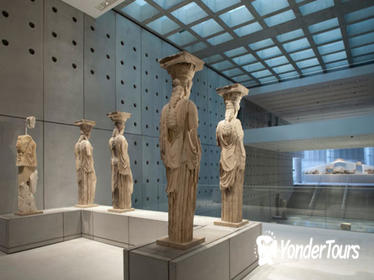 $ 57
3 Hours 30 Minutes Archaeology Tours Free Cancellation
Journey back to Ancient Greece on this 3-hour tour of the UNESCO-listed Acropolis of Athens, including a visit to the New Acropolis Museum. Visit the Theatre of Dionysus and Dionysus Sanctuary, stroll past the Propylaea gateway and the Temple of Athena Nike, then stand in awe before the grand ruins of the Parthenon, looking down over Athens below. After exploring the sprawling citadel, follow your guide on a tour of New Acropolis Museum and learn more about the excavations as you browse more than 4,000 artifacts unearthed from the Acropolis.
View Tour 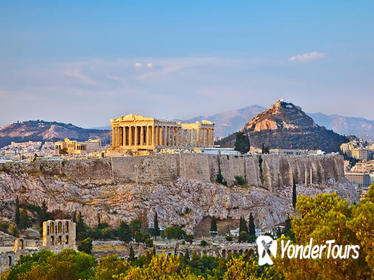 $ 38
2 Days Sightseeing Passes
Choose from three Athen city passes, all of which include a hop-on, hop-off bus tour, plus access to the Acropolis Museum. The "Classic" and "Complete" packages also include skip the line-access to the Acropolis itself, so you'll save time waiting in line during the heat of the day. Depending on the option chosen, your trip can provide access to other museums and shopping outlets, plus round-trip transportation from the airport.
View Tour 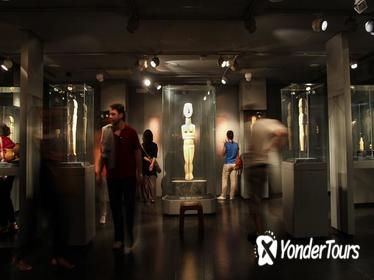 $ 64
3 Days Museum Tickets & Passes Free Cancellation
If you're a fan of museums - this is the only pass you'll need in Athens. You'll save money buying individual museum passes, and instead have one pass that gives you access to 15 different museums, galleries, and shows. Choose the museums that interest you, and spend three days exploring. Potential options include the Acropolis Museum, and the Athens War Museum. Conveniently, you'll also get skip-the-line entrance tickets, so you won't waste time in lines.
View Tour 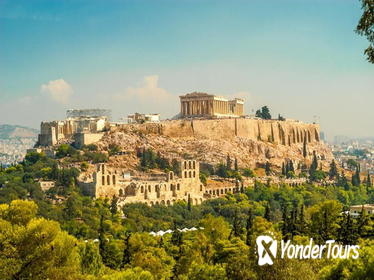 $ 4,089
5 Days Multi-day Tours
Are you ready to experience a sophisticated journey through time? Explore the fascinating city of Athens and create priceless memories you will cherish for a lifetime. Indulge in a boundless adventure and prepare to be amazed while strolling around Athens, the Greek capital. It doesn't matter if you are traveling alone, with friends, with your better half or with your family. This trip is ideal for cosmopolitan travelers who are looking for a luxurious city break, a short getaway that includes food, culture, history and pampering.
View Tour 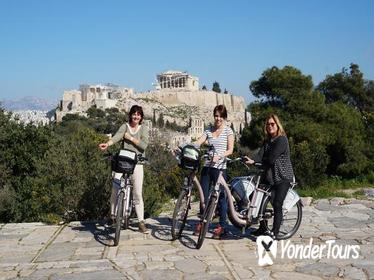 $ 52
2.30 to 3 Hours Bike & Mountain Bike Tours Free Cancellation
Make easy work of Athens' busy streets and steep hills by whizzing around the sights on an easy-to-ride electric bike. This 3-hour small-group bike tour is limited to 12 people and is ideal for first-time visitors or those wanting to see more of the city. Glide effortlessly around the hilltop ruins of the UNESCO-listed Acropolis of Athens, pedal around the atmospheric Old Town of Plaka and explore lively Monastiraki. Hop off along the way to see the New Acropolis Museum, Hadrian's Arch, Panathenaic Stadium and the National Gardens of Athens.
View Tour 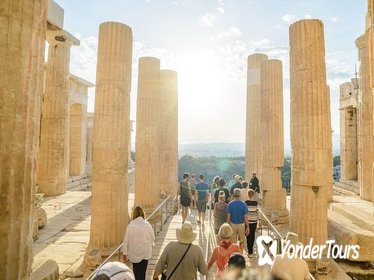 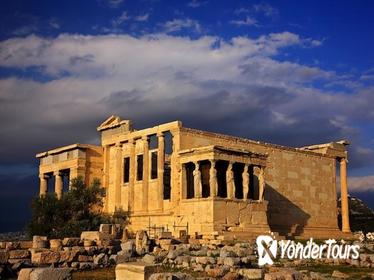 $ 80
5 Hours Bus & Minivan Tours Hotel Pickup Offered Free Cancellation
Enhance your experience of Athensâ€™ ancient wonders on a half-day sightseeing tour of the Greek metropolis. Alongside an expert guide, see prominent landmarks that represent both classic and contemporary Athens before browsing the fascinating exhibits housed within the Acropolis Museum. Marvel at archaic monuments like the Temple of Olympian Zeus and the Panathinaiko Stadium and receive an exceptional introduction to the history and heritage of the city from your knowledgeable guide.
View Tour 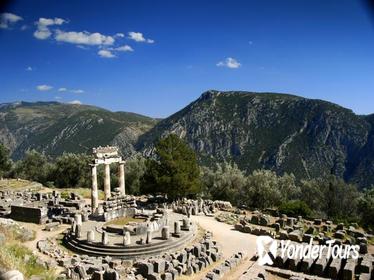 $ 243
2 Days Super Savers Hotel Pickup Offered
Sightsee around Athens, Cape Sounion and Delphi on this 2-day Athens Super Saver. Combining three top-selling tours at a discounted price, and designed for those with pre-booked overnight accommodation, the tour spotlights the best of Athens and two of Greece's classical treasures. On one day, discover top Athens attractions including the Acropolis, and take an afternoon trip to Cape Sounion, home to the stunning Temple of Poseidon. Couple the day up with a full-day trip to the spectacular mountainside temples and stadium at Delphi, one of Greece's greatest archaeological wonders.
View Tour 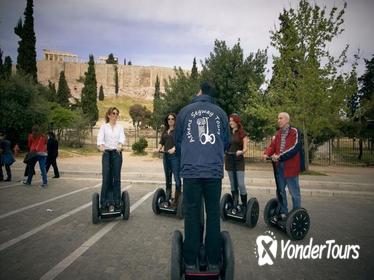 $ 68
2 Hours Segway Tours Free Cancellation
Journey around ancient Greece on a Segway! This thrilling 2-hour Segway tour is the ideal introduction to Athens, taking in historic highlights like the UNESCO-listed Acropolis, the Ancient Agora and the Temple of Hephaestous. Learn to operate your easy-to-use self-balancing Segway, then follow your guide on a scenic tour around the neighborhoods of Plaka, Monastiraki and Thiseio, stopping to take in the views from Mars Hill. Best of all: this small-group tour is limited to 12 people, ensuring a personalized experience.
View Tour 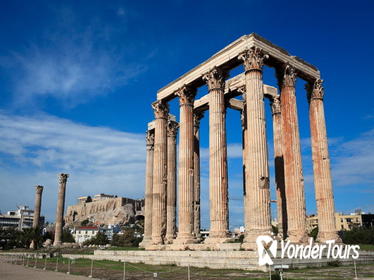 $ 192
2 Days Super Savers Hotel Pickup Offered Free Cancellation
Admire Athens' star attractions and the classical site of Delphi on this 2-day Athens Super Saver - combining two best-selling tours for one discounted price. On one day, enjoy a half-day sightseeing tour of Athens' highlights, including Syntagma Square and a guided walk around the stunning monuments of the ancient, rocktop Acropolis. On the next or previous day - your choice - take a day trip to Delphi, one of Greece's greatest ancient treasures. Tour the mountainside site, with its Temple of Apollo, stadium and sanctuaries, and hear all about its captivating history.
View Tour 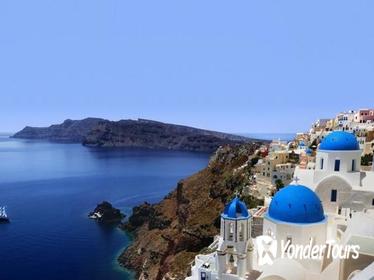 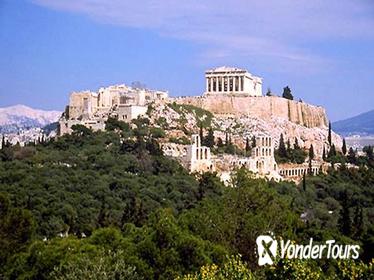 $ 556
8 Hours City Tours Hotel Pickup Offered
Make the most of your time in the Greek capital with a completely private, full-day tour of Athens' most iconic attractions. Travel in a comfortable vehicle with a local guide and hit up all of the city's must-see sites, including the Acropolis and its new museum, the Temple of the Olympian Zeus, the Ancient Agora, the National Archaeological Museum, the Old Town Plaka and more. Watch the changing of the guard ceremony at the Greek Parliament Building, and take in panoramic city views from atop Lycabettus Hill. Price is per group, based on a maximum of 7 people.
View Tour