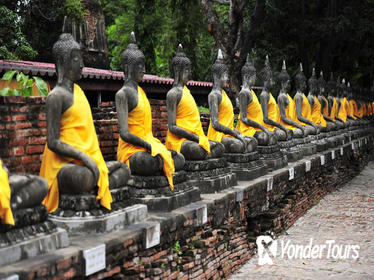 $ 109
9 Hours 30 Minutes Day Trips Hotel Pickup Offered
Discover the ruins of an ancient Siamese city on a full-day coach tour of Ayutthaya from Bangkok. Walk the elegant grounds of the Kings' Summer Palace, explore a maze of towering chedis and encounter a mysterious Buddha's head wrapped in the roots of a Banyan tree. Get a taste of Thailand's vivid present at an Ayutthaya restaurant and learn the stories that haunt this former capitol, whose rambling temples and magnificent stupas are protected as a UNESCO World Heritage site.
View Tour 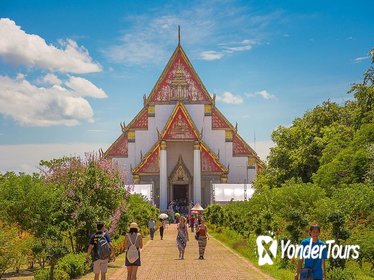 Enjoy exploring around the UNESCO World Heritage Site at the Ayutthaya Historical Park by your own expenses, along with a boat trip to Bang Pa-In Palace, the former Royal Summer Residence. 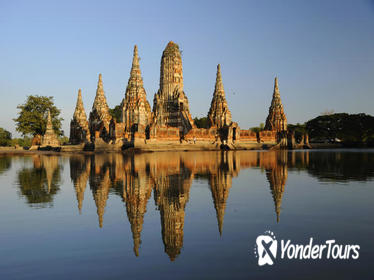 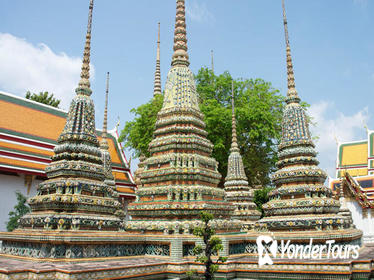 $ 12
8 Hours Private Sightseeing Tours Hotel Pickup Offered Free Cancellation
Get a personalized day tour of Bangkok or neighboring provinces for a unique look at Thai culture and lifestyle. Your fully licensed local guide works with you to tailor a trip that can include the Summer Palace, Floating Market and much more.
View Tour 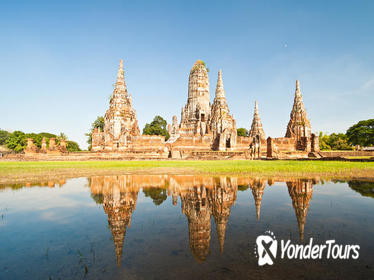 $ 113
7 to 9 Hours Private Sightseeing Tours Hotel Pickup Offered Free Cancellation
The Siamese capital of Ayutthaya is one of Thailand's most impressive UNESCO World Heritage sites and visiting on a private tour means you can explore the ancient marvel in your own time. This full-day tour from Bangkok combines a visit to Ayutthaya with a stop at Wat Phu Khao Thong, a tour of Bang Pa-In Summer Palace, and a delicious Thai lunch at a local restaurant.
View Tour 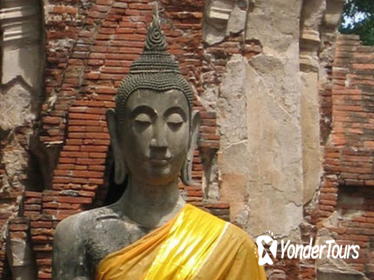 $ 60
9 Hours Day Trips Hotel Pickup Offered Free Cancellation
Combine a visit from Bangkok to Ayutthaya - the UNESCO-listed ancient capital of Siam - with a riverboat trip on the Chao Phraya River. An informative guide highlights Thailand's fascinating history as you explore Ayutthaya temples, stone ruins and Buddha statues in the old capital of Thailand, which was ransacked by invading Burmese in the 18th century. This full-day tour includes lunch and returns you to Bangkok by boat.
View Tour 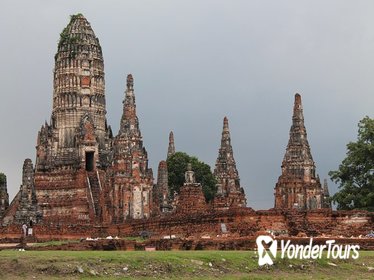 Discover the ancient Siamese city of Ayutthaya during this tour from Bangkok. Ride a local train to the UNESCO-listed area and explore temples such as Wat Mahathat, where you can find the Buddha in a banyan tree. After lunch, cruise down the Chao Phraya River by long-tail boat until you arrive at the Bang Pa Summer Palace. Learn about the history of Thailand from your informative guide throughout the tour. 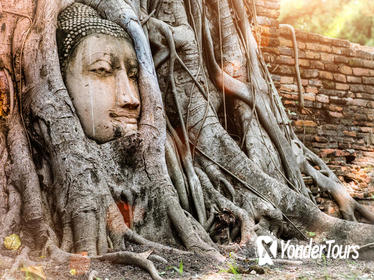 $ 70
8 Hours Cultural Tours Hotel Pickup Offered Free Cancellation
Explore the ancient Siamese city of Ayutthaya with your very own private guide and vehicle on a full-day tour from Bangkok. Visit the UNESCO-listed city and see the Bang Pa-In Summer Palace, Wat Chaiwatthanaram, and Wat Mahathat, where the famous Buddha in a tree is located. Learn about Thailand's rich history and culture from your guide as you wander around the ruins.
View Tour 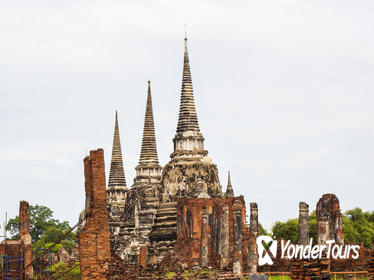 $ 70
7 to 9 Hours Cultural Tours Hotel Pickup Offered Free Cancellation
Benefit from personalized attention and a flexible itinerary on this private guided tour of Ayutthaya from Bangkok. This long day trip will be a breeze with round-trip transportation provided; you can focus on the scenery and enjoying the experience. Listen to insightful commentary from your guide while visiting highlights such as Wat Mahathat, Wat Chaiwattanaram, and Bang Pa-In Summer Palace.
View Tour 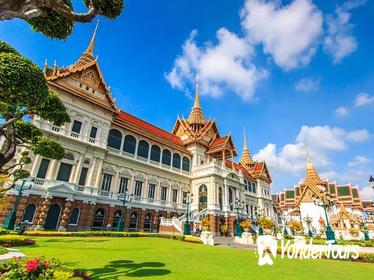 Private Tour Guide Services in and around Bangkok

$ 13
8 Hours Private Sightseeing Tours Hotel Pickup Offered
This customizable private tour showcases the best of Bangkok and beyond. Follow your personal guide through some of the city's top attractions, including the Summer Palace, Grand Palace, and Floating Market. Explore some of Bangkok's most vibrant neighborhoods, sample local cuisine (own expense), and wander the shops and sites with a local who offers insight and information along the way.
View Tour 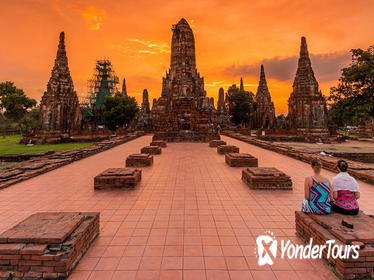 $ 42
9 to 10 Hours Day Trips Hotel Pickup Offered Free Cancellation
The Phra NakhonÂ Si Ayutthaya or Ayutthaya in short, is one of Thailand's historical and majestic highlights. Serving as the Thai capital for 417 yearsÂ (1350 1767: Kingdom of Ayutthaya), it was once glorified as one of the biggest cities in the world a Southeast Asia center for civilizations. During the 17th century, most foreign visitors to Ayutthaya, traders or diplomats alike, claimed Ayutthaya to be the most illustrious and glittering city that they haacd ever visited. The map of Ayutthaya published in 1691 by Simon de la Loubre in Du Royaume De Siam is proof of such recognition. The temple compounds are still awe-inspiring even in disrepair and a visit here is memorable and a good beginning for those drawn to the relics of history.The architecture of Ayutthaya is a fascinating mix of Khmer (ancient Cambodian style) and early Sukhothai style.Â
View Tour 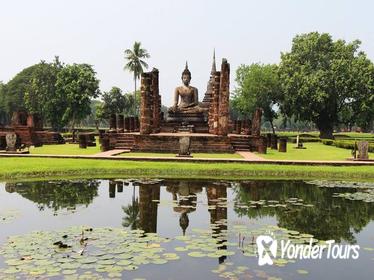 $ 756
6 Days Multi-day Tours Hotel Pickup Offered
Discover the best of central and northern Thailand on this 6-day discovery tour. Explore the great city of Bangkok as well as Chiang Mai, Chiang Rai, Lampang and more with hotels, meals, and transportation included. This multi-day trip is a great way to get an overview of these diverse regions of Thailand before heading to your next destination.
View Tour 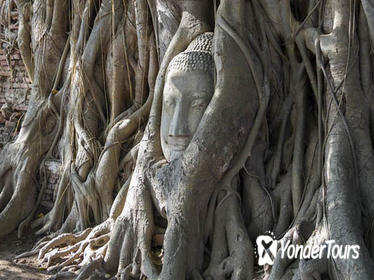 $ 71
9 Hours Day Trips Hotel Pickup Offered Free Cancellation
At the beginning of the fifteenth century, Ayutthaya was a powerful city.The 35 kings that followed him checked for about 400 years, large parts of Siam ( the former name of Thailand) , and extended continuously the capital .During his best years Ayutthaya was a metropolis with three royal palaces, 375 temples and 94 entrances to the city , protected by 29 ramparts .French, Portuguese , British, Dutch and Japanese lived in its urban districts , separated by about 1 million of the Siamese .The Europeans possessed their own churches , including the Cathedral of St. Joseph of the eighteenth century , which still exists .You will visit the fabulous ruins of the ancient splendor of the city "˜ of Ayutthaya , which in 2000 had 65,000 inhabitants .
View Tour 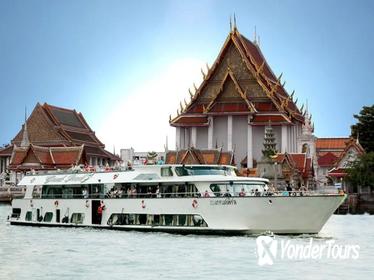 $ 91
9 Hours 30 Minutes Day Trips Hotel Pickup Offered
Discover the royal capital of ancient Siam on a full-day trip to Ayutthaya, and return to Bangkok aboard a luxurious Chao Phraya riverboat. Wander the manicured grounds of the King's Summer Palace, explore the weathered stone temples of the ruined city and encounter silk-draped Buddhas, elegant chedis and towering Banyan trees. Learn the dramatic history of this UNESCO World Heritage Site, then step onto an air-conditioned riverboat to enjoy a traditional buffet and travel the tranquil 'River of Kings' back into the bustling heart of Bangkok.
View Tour 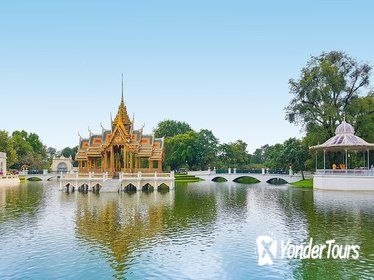 Venture away from the metropolis of Bangkok and ride on a train to the fabulous city of Ayutthaya which was declared a UNESCO World Heritage Site. 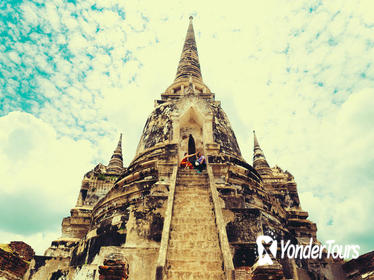 $ 64
8 Hours Private Day Trips Hotel Pickup Offered
Visit the ancient home of the Siamese kings on a full-day, private tour from Bangkok to Ayutthaya, a former imperial capital and a UNESCO World Heritage Site. See the ornate Bang Pa-In, or Summer Palace, a Buddha image in a Bodhi tree, and historic temple complexes, then take a slow boat ride around Ayutthaya island. This 8-hour tour accommodates up to 8 people, includes all activities and round-trip transport from centrally-located Bangkok hotels.
View Tour