Things to Do in Ghent

Choose from 3 Fun Things to Do in Ghent 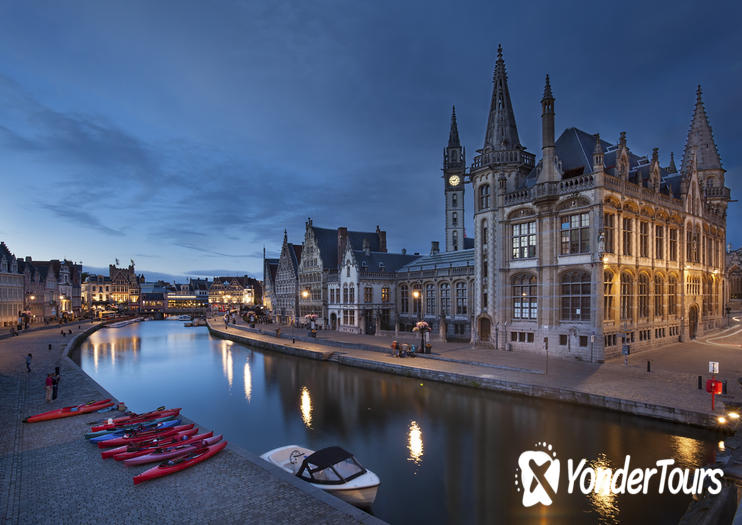 The medieval quays of Graslei and Korenlei face each other across the canalized River Leie and originally formed part of Tusschen Brugghen, the city’s thriving harbour. Their banks are lined with a rare architectural treat – the loveliest gabled guild houses and warehouses in Belgium, built between the 1200s and 1600s by rich merchants and guilds whose wealth came from trade. The streets are united by St Michael’s Bridge, from where their gabled delights can be seen at best advantage, and although considerable restoration work has taken place, these distinctive townhouses have maintained their allure.
Graslei is lined by canal-side restaurants blessed with a graceful backdrop of gabled gild houses; the oldest is the Het Spijker (Stockpile House) at no. 10; other ornate façades once contained the guild houses of the stonemasons, the free boatmen and the grain measurers as well as the former customs house. Across the river from Graslei, Korenlei offers many surprises of its own, including imposing step-gabled, red-brick 16th-century houses. No. 9 is of particular interest for the gilded swans adorning the facade; in its time De Swaene has been both a brewery and a bordello. The pink-and-white Gildehuis van de Onvrije Schippers (Guild House of the Tied Boatmen) dates from 1739 and is a masterpiece of Flemish Baroque architecture.
By day, tour boats leave from the quays of Graslei and Korenlei; after dark the district morphs into party central and restaurants, cafés and bars sprout along the quaysides.

Graslei and Korenlei are accessible to all 24/7. Their gorgeous medieval architecture looks spectacular when floodlit at night. 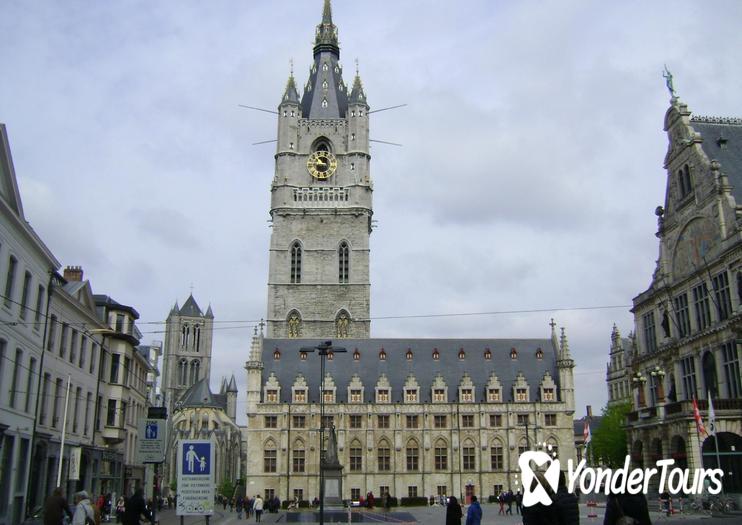 Book-ending the square of Botermarkt with St Bavo’s Cathedral, the ornate UNESCO-listed Belfry and the Cloth Hall at its feet stand testament to the great wealth of Ghent in the 14th century; built with money from members of the wool and textiles guilds, they are in striking Brabant Gothic style. The Belfry is topped with a gilded copper dragon and holds a carillon of 54 bells that have rung for more than six centuries; take the elevator to the viewing gallery at 66 m (217 ft) above Sint-Baafsplein to see the bells and take in panoramic views of gabled facades, St Bavo’s Cathedral and the Gothic ornamentation of St Nicholas’ Church. A small museum displays models of the church, a few pieces of armor and the original dragon from atop the tower.
The Cloth Hall dates from 1425 and was built as the storehouse for textile produced in Ghent; every piece had to be inspected here for quality before it could be exported. The hall still has its original carved wooden ceiling and a Baroque extension added in 1741 served as the city’s prison until 1902. Like Graslei and Korenlei, the Belfry looks spectacular when floodlit at night. 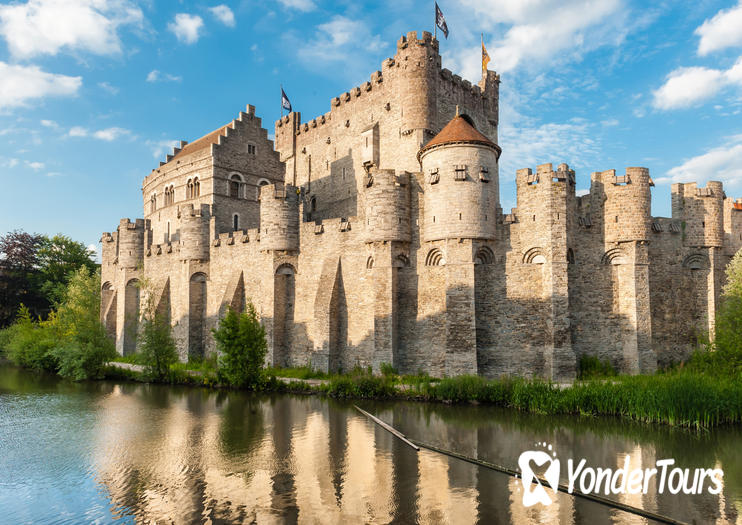 Gravensteen Castle (Castle of the Counts)

Moated Gravensteen Castle is a circular, gray fortress built in 1180 alongside a split in Ghent’s River Leie to symbolize the power of Philip of Alsace, who was the ruling Count of Flanders. Although a wooden castle had existed here for centuries, the new fortification was built to send out a clear message of his supreme power to his political enemies. Philip had been on several Crusades and clearly modelled the design of his new home on the austere crusader castles scattered around the Mediterranean Sea from Portugal to Greece. Its two-meter (six-foot) thick walls were made of Tournai limestone and fortified with battlements while the castle’s towers and turrets housed stables, a church and state apartments as well as a torture chamber to deal with anyone brave – or foolish – enough to cross Philip. Following extensive restoration in the late 19th century, today the torture chamber is a gruesome museum displaying guillotines, branding irons and thumbscrews; there’s also an armory crammed with crossbows, spears and chain mail. Events for families at the castle include jousting in the central courtyard and a festive market at Christmas.