Things to Do in Nadi

Choose from 7 Fun Things to Do in Nadi The Sri Siva Subramaniya Temple is the largest Hindu temple in the southern hemisphere, a wildly colorful and ornate structure that reflects a Dravidian architectural style rarely seen outside of India. In fact, it was Indian craftspeople who painted and carved the temple’s most impressive features, including its detailed wooden deities and intricate ceiling frescos.
A visit here is a must for anybody looking to experience the religious, cultural and architectural diversity of Fiji. The temple complex is divided into three, with the deity Murugan—to which the Sri Siva Subramaniya Temple is dedicated—housed in the main temple. The second part of the complex is the Ganesh temple, while the third is dedicated to the deities Meenakshi and Shiva.
Visit the Sri Siva Subramaniya Temple as part of a half-day tour from Nadi, incorporating stops at a local handicrafts shop and the Namaka Market, as well as visits to the Garden of the Sleeping Giant and the mud pools at Sabeto Hot Springs.

The Sri Siva Subramaniya Temple is located at the southern end of Queens Road, the main road that runs through Nadi. Be sure to dress conservatively for your visit (or borrow a sarong at the entrance) and remember to remove your shoes.
Address: Queens Road, Nadi, Viti Levu, Fiji
Hours: 6am-7pm
Admission: $3.50
From $ 54 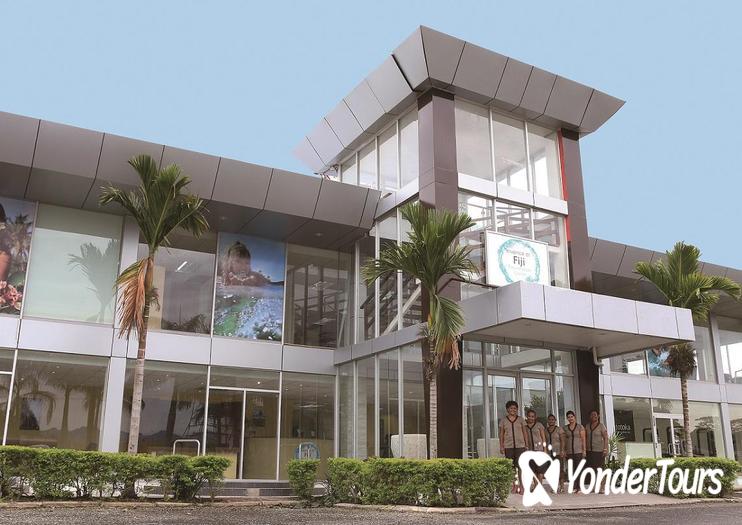 After you’ve experienced the luxurious Essence of Fiji Rejuvenation Center, airport layovers anywhere in the world won’t ever seem the same. Just minutes from Nadi’s international airport, the center is a sanctuary for weary travelers awaiting their upcoming flight, or a modern retreat for pampering and dining throughout your Nadi stay. If you have time to kill before your flight—or a long layover in Nadi—a transit pass is like having the world’s best airport lounge minutes away. Refresh with a shower, store your luggage, and enjoy a relaxing foot massage, before sinking into a beanbag chair and settling in for a movie. There’s free Wi-Fi for finishing up some work, as well as a café for perking up and satisfying your growing hunger. Head up to the center’s rooftop lounge for a view of the Sabeto, or if you’d prefer to really be pampered before drifting onto your flight, a full service day spa has additional treatments to wish you a fond farewell.

At the Essence of Fiji Rejuvenation Center, a basic transit pass includes free Wi-Fi, shuttle service from the airport, a foot massage, luggage storage, and access to the movie room. A basic transit pass is available, in addition to a full menu of additional spa services available for higher fees. A rejuvenation pass includes all the above services, as well as $100 Fijian dollar credit toward services with the center. The Essence of Fiji Rejuvenation Center offers free transport to and from Nadi International Airport. Pickup from Denerau is also available for $7 one way.
Address: Lot 1, Nasau, Nadi Backroad, Nadi, Fiji
Hours: Daily 7am-10pm
Admission: Varies
From $ 19 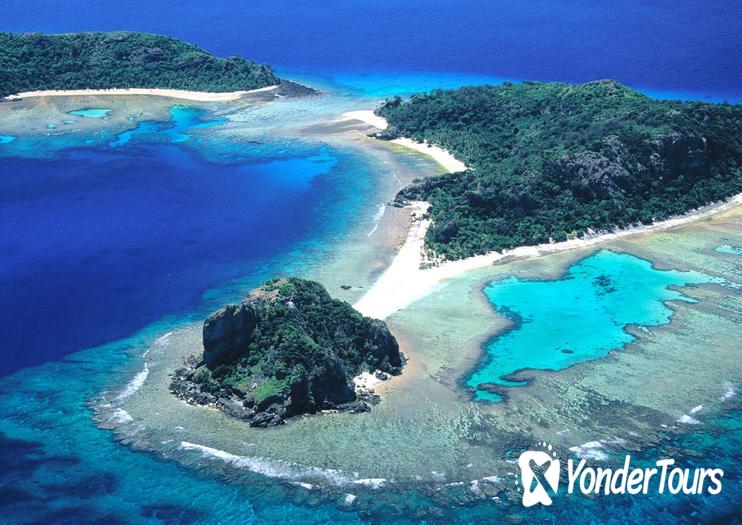 Known also as Sandalwood Island, the waters surrounding Vanua Levu have some of the best dive spots in the South Pacific. These include the world-renowned Rainbow Reef and Savusavu Bay.

The island itself does not have the best lazing beaches, but the snorkeling is unsurpassed. In fact, it impressed Jean-Michel Cousteau so much he built a resort overlooking Savusavu Bay.

Savusavu is the fastest growing town in Fiji. It has a lively expat community, a flourishing bar and restaurant scene, and it's popular with people island hopping by boat to stop and grab supplies at.

The interior of Vanua Levu is heavily forested in parts and offers excellent birdwatching, walking and trekking. The land given over to agriculture supports sugarcane and coconut plantations.

If you're short on time or not fond of long boat trips then it is best to get to Vanua Levu by airplane; there are a number of reliable carriers and the flight from Vitu Levu is less than 30 minutes.

This tiny, colorful museum in the heart of Fiji is jam-packed with more than 3,700 years worth of island culture, art and traditions. Travelers will find a well-preserved example of the country’s heritage amid the galleries and halls of this local treasure.
Whether it’s the impressive 100-year-old Ratu Finau, ancient weapons of war, or the story of cannibalism, there’s something for everyone in this unassuming destination. Though archeological artifacts and other items are well-displayed and clearly marked, travelers say the technology-free Fiji Museum is strictly no frills but definitely worth a visit. A tropical garden paradise awaits you on Taveuni. Rich volcanic soil has made it a stunning nature-lover’s dream with high volcanic peaks covered in lush dense foliage.

Diving around the island is world-class, the surrounding waters are as fertile as the land and you will see sharks, turtles and loads of colorful fish all darting around the spectacular coral reefs. Subsequently the island is home to lots of good PADI approved dive companies. If you’re not keen to dive then most companies offer snorkeling which is also richly rewarding.

The best beaches for swimming are Lavena and Matei on the east and northern coasts. On the south coast there are caves and blowholes that are hard to access but worth exploring.

The most popular way to get to Taveuni is by airplane but there are inter-island ferries, grab a cabin if you’re keen on the 20-hours it takes to get to Taveuni from Suva.
Address: Fiji
Admission: Free
From $ 74 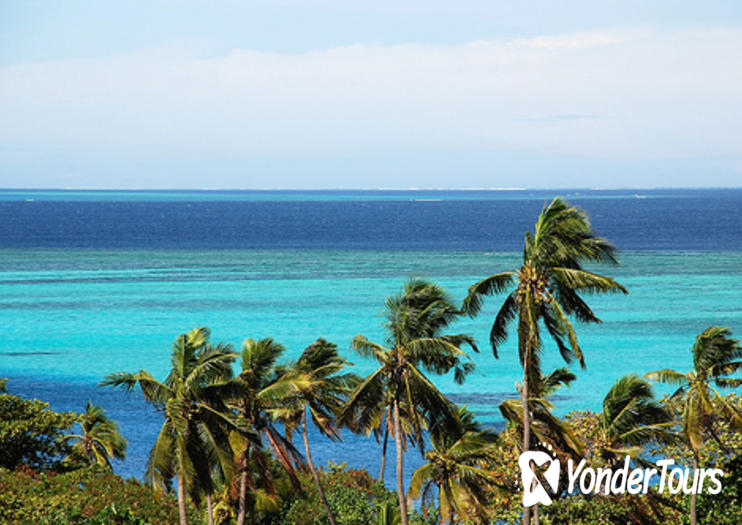 For stunning 360-degree views of Fiji that you'll never forget, head to Vuda Lookout. The elevated position will give you views over the surrounding farmland to Nadi Bay and Nadi International airport. To the east are the beautiful mountain ranges covered in tropical forests. Fifty miles to the northwest you can see the lovely Yasawa Group of Islands which stretch for miles towards the horizon.

The lookout is a short drive from Nadi Airport it is best reached by taxi or with a tour. A popular tour groups the Vuda Lookout with other highlights of the area including an orchid farm. 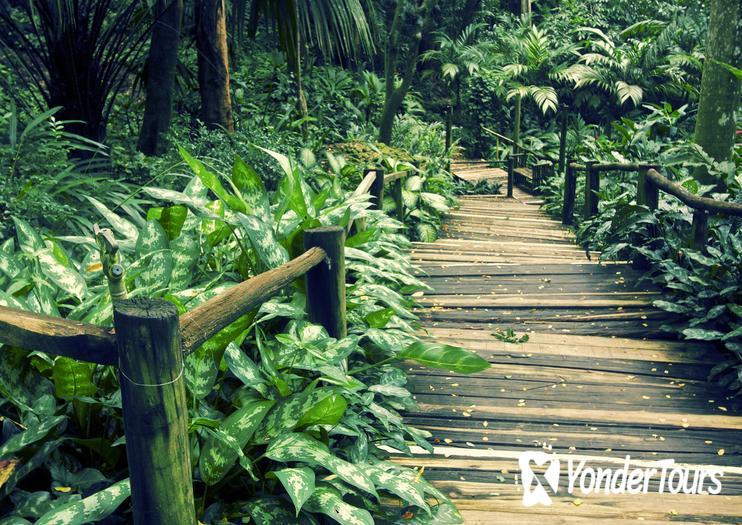 Garden of the Sleeping Giant

In the shadows of Sleeping Giant Mountain in the Nausori Highlands, the Garden of the Sleeping Giant is a horticultural paradise, bursting with flowers, lily ponds, and lush rain forest. Founded in 1977 by actor Raymond Burr, it’s now one of Nadi’s most popular attractions and home to more than 2,000 varieties of orchids.
The Basics
Visitors can explore the Garden of the Sleeping Giant independently, following the boardwalks through the rain forest, or learn more about the exotic plants and flowers on a guided walking tour. The garden is a popular feature of Nadi sightseeing tours, and half- or full-day tours often include nearby attractions such as the Vuda Lookout, the Sabeto Valley mud baths, and Namaka Market in Nadi.
Things to Know Before You Go
How to Get to There
The Garden of the Sleeping Giant is located just north of Nadi, on the way to the Nausori Highlands. The site is best reached by car or taxi; it’s about 15 minutes’ drive from the city.
When to Get There
The garden is open daily year-round, but it’s only open during the morning on Sunday. Floral displays vary from season to season, but the most vibrant periods occur from June to July and November to December, when orchids are in full bloom.
Orchids at the Garden of the Sleeping Giant
The magnificent orchids are the stars of the garden and the collection is one of the most diverse in the world. Look for spider orchids, bee orchids, and dancing lady orchids, as well as Cattleya hybrids and dozens of Asian varieties.
Address: Garden of the Sleeping Giant, Wailoko Road, Nadi, Fiji
Admission: Varies
From $ 50