Things to Do in Sedona

Choose from 12 Fun Things to Do in Sedona 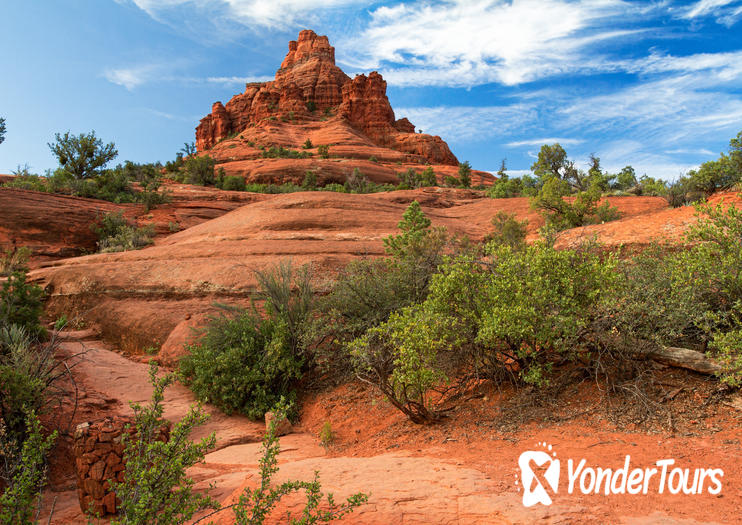 Stunning scenery, epic red rock landscapes and wide-open skies are just part of what makes a trip to Sedona’s Bell Rock a memorable travel experience. Visitors can navigate the destination’s five trails, which range from an easy hike between the Courthouse Vista Parking Lot and the Base of Bell Rock, to more challenging routes, like the moderate climb to Upper Bell Rock Trail or the most strenuous option, known as The Ascent. Travelers will catch incredible views of Chicken Point, Submarine Rock and Chapel of the Holy Cross—true icons of Arizona’s famed Red Rock State Park—from various lookouts along Bell Rock’s multiple trails. 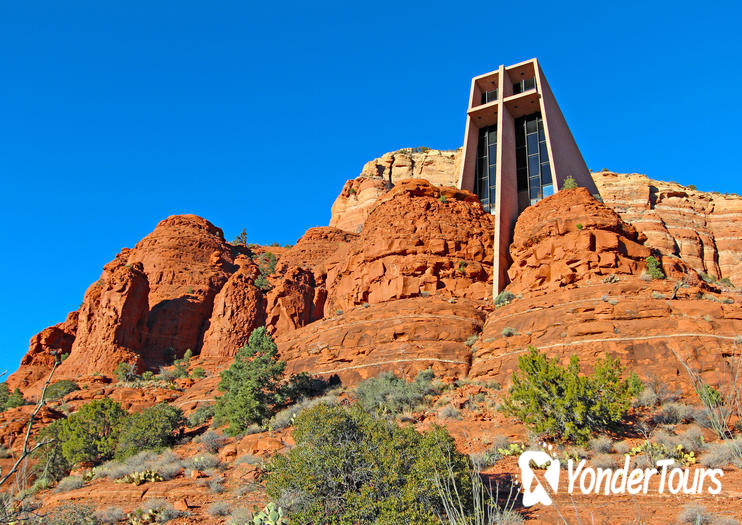 Chapel of the Holy Cross

This chapel in the red rocks of Sedona is literally built into the side of a hill. And while it may be a spot for religious contemplation and quiet prayer, it’s also home to some of the area’s most breathtaking views, including epic sunsets over pristine desert landscape.

As in most chapels, the benches of this tiny structure face an altar made for worship, but what makes Chapel of the Holy Cross unique is the massive windows that overlook some of the state’s most impressive and picturesque scenery.

Chapel of the Holy Cross is located at 780 Chapel Road in Sedona. Taize Prayer Service takes place every Monday at 5 p.m., however no actual services happen here. Skip parking at the bottom of the hill to avoid the long hike to the chapel and instead head through the gates for a closer spot.
Address: 780 Chapel Rd, Sedona, AZ, USA
From $ 15 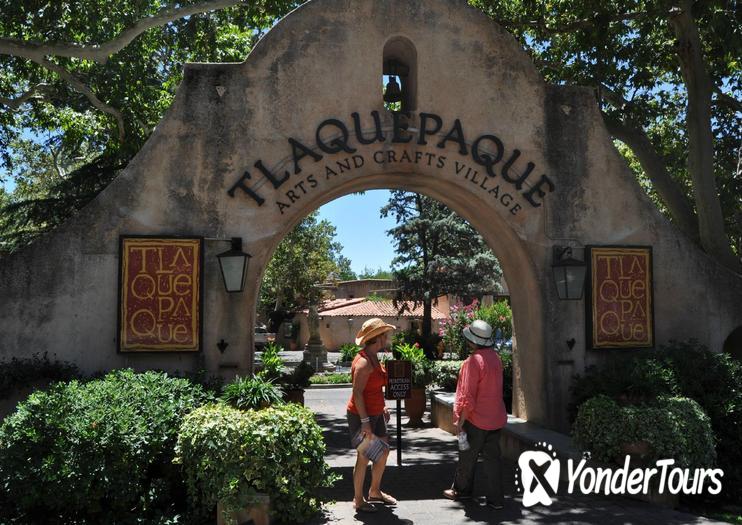 Most travelers venture to Sedona to get back to nature, get outdoors and get up close to Arizona’s stunning red rocks. But the unique shops, handmade crafts and tasty restaurants of Tlaquepaque offer visitors a chance to experience another part of Sedona—its artist community.
Visitors can wander the 40 specialty shops that make up this laid-back shopping destination and bare witness to artisans at work. Whether its blowing glass, painting an Arizona landscape or throwing a pot in one of Tlaquepaque’s studios, a visit to Tlaquepaque puts travelers in touch with the artists and offers a one-of-a-kind experience that’s sure to be a memorable part of any Sedona trip. 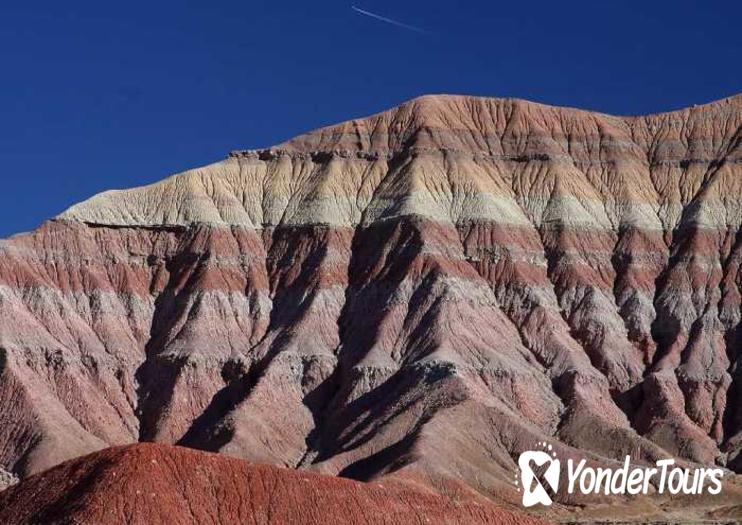 With views of ruddy cliffs everywhere you look, Red Rock State Park is a sight to behold. Trails slice through this 286-acre (116-hectare) nature preserve, winding through manzanita juniper shrubs toward the banks of Oak Creek. The visitor center offers numerous daily activities for guests, including nature walks and naturalist activities.
The Basics
The famous red rock scenery of Sedona is at its best within the bounds of this popular state park—a perfect place to enjoy Arizona's scenic natural beauty. While Sedona is a popular getaway in its own right, many travelers choose to visit Red Rock State Park on a day trip from Phoenix. A typical Jeep tour through the area will include the park, as well as Chapel of the Holy Cross and Bell Rock. Some itineraries also take visitors to Montezuma Castle or Tuzigoot national monuments.
Things to Know Before You Go
How to Get There
The Red Rock State Park is located on the western end of Sedona and is about one hour south of Flagstaff. The easiest way to visit is to join a guided tour from Sedona or Phoenix or drive yourself.
When to Get There
The park is open daily throughout the year, with extended hours during the summer months (mid May to late August). The best time to visit is in spring (March to May) when temperatures are warm but not baking and desert wildflowers are in bloom.
Trails of Red Rock State Park
This state park’s trail system comprises 10 developed trails covering some five miles (eight kilometers). The Eagle’s Nest Loop takes visitors to the highest point in the park, while the Javelina Trail passes through serene piñon and juniper woodlands. Those looking for a longer hike can tackle the Lime Kiln Trail, a 15-mile (24-kilometer) shared-use trail connecting Red Rock State Park to nearby Dead Horse Ranch State Park.
Address: 4050 Red Rock Loop Road, Sedona 86336, USA
From $ 76 The Tuzigoot National Monument is made up of the remains of a pueblo building on a hilltop outside of Clarkdale, Arizona.
Built and occupited by the Sinagua people from roughly 1000 to 1400 C.E., the Tuzigoot village buildings include some with two or three stories. The ruins cover 42 acres, and you can see pithouses (entered via ladders through doors cut into the roof) and petroglyphs. There are other Sinagua ruins in the area, but this is the largest. There are artifacts recovered from the excavations of the Tuzigoot site on display in the visitor center.
The name “Tuzigoot” is an Apache word, and the site was named by an Apache who was on the archaeological excavation crew in the 1930s when the site was found. The name means “crooked water,” referring to a nearby river.

The Tuzigoot National Monument is roughly 90 miles north of Phoenix, and your best bet is to follow the driving directions on the National Park Service website (GPS often provides the wrong information). The monument is open daily from 8am-5pm, closed only on Christmas Day. Entry is $5 for adults (good for 7 days), and children under 16 are free.
Address: 25 Tuzigoot Rd, Clarkdale, Arizona, USA
Hours: Daily 8am-5pm, closed Christmas Day
Admission: $5 (adults)
From $ 139 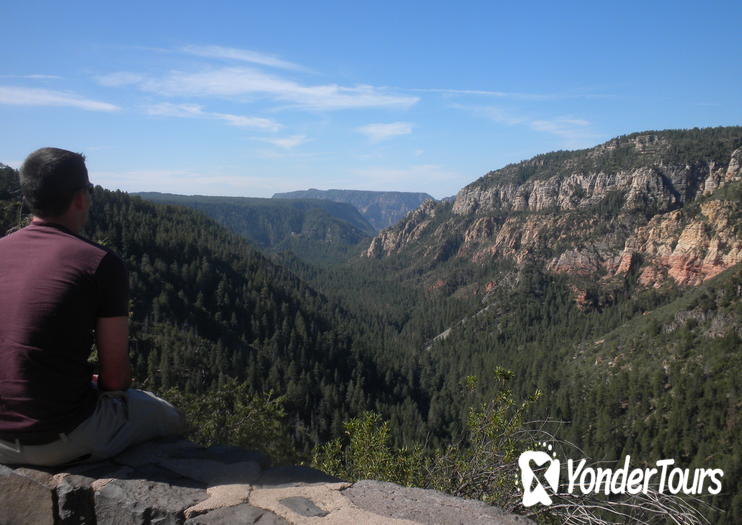 Visitors to Oak Creek Canyon would be wise to stop at this scenic viewpoint for a bird’s eye view of the rolling Arizona landscape. A well-kept lookout lined with Native American artisans selling handmade jewelry proves a popular destination for tourists and photographers alike. Though visitors warn Oak Creek Vista can get crowded, most agree its epic views are worth the trip.

Oak Creek Vista is located 13 miles north of Sedona. It is open from 9 a.m. until 4 p.m. April through November.
Address: Sedona, Arizona, USA
From $ 70 Boynton Canyon Trail’s breathtaking red rocks views and easy passes make it one Sedona’s most accessible hikes. Travelers find impressive panoramic landscapes early in the three-mile trek, where open desert, lush foliage and sky-high canyon views reign supreme. And while some say this accessible hike ends in a rather anti-climactic way because box canyon walls stretch up on either side, ancient Sinaguan Indian ruins and tons of biodiversity make it a memorable outdoor experience for visitors to Sedona.

Boynton Canyon Trail is located in the Red Rock-Secret Mountain Wilderness. Travelers warn this 6.1-mile round-trip hike can be particularly unforgiving during summer, as the initial stretch of trail offers limited shade. Visitors should get to the trailhead early to secure a parking spot and beat the crowds, since Boynton Canyon Trail is one of the region’s most popular.
Address: Sedona, Arizona, USA
From $ 70 If you gaze at Snoopy Rock from the right angle, the red rock formation resembles the famous Peanuts dog lying on his back with Woodstock on his nose. This rock—one of the most famous in Sedona—can be spotted from a number of viewpoints, such as Marg’s Draw Trail, and the shops, restaurants, galleries, and cafés of uptown.
The Basics
Snoopy Rock has been making travelers smile since it first got its name, and visitors agree you won’t even have to squint to find Mother Nature’s homage to Charles Shultz. Nearby Lucy Rock, named for its resemblance to Charlie Brown’s famous friend, rounds out the Peanuts experience for travelers to this Sedona spot. Just about every tour of Sedona’s red rock country, including Jeep tours and helicopter flights, will point out the formation.
Things to Know Before You Go
How to Get There
While Snoopy Rock is visible from uptown Sedona, some of the best views can be found along Marg’s Draw Trail. The trailhead is on Sombart Lane just off Highway 179. Parking at the trailhead requires a Red Rock Pass.
When to Get There
Mild temperatures make spring (March to May) and autumn (September to November) the best seasons to explore Sedona’s outdoor attractions, like Snoopy Rock. Expect daytime highs in the 90s F (30s C) during the summer months, and occasional snowfall during the winter.
Famous Rock Formations of Sedona
Snoopy Rock is certainly a star, but it’s not the only natural landmark among Sedona’s striking red rock formations. Cathedral Rock occupies its own hill and is one of the most recognizable Sedona landmarks. From West Sedona, look for Chimney Rock, Thunder Mountain, and Coffeepot Rock; all are particularly impressive at sunset. Bell Rock welcomes visitors entering Sedona from Highway 179.
Address: Sedona, Arizona, USA
From $ 65 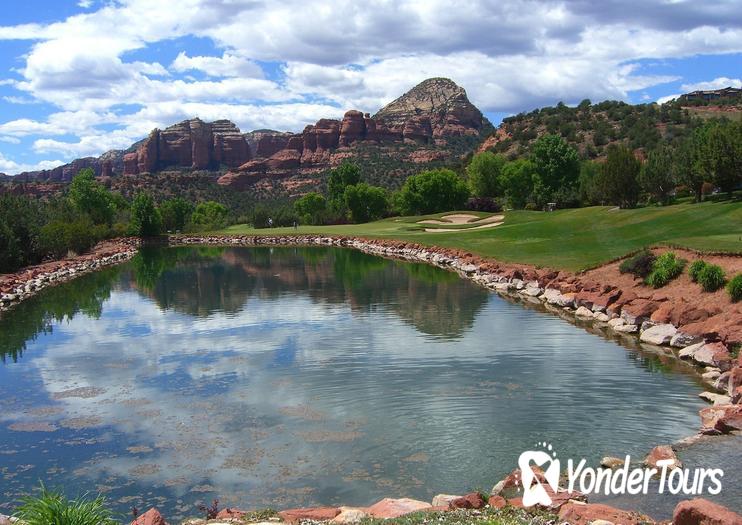 Sedona may be known for its stunning red rocks, desert life and spiritual slant, but those who like to live their life in the green still have their chance at the Seven Canyons Golf Course. Since 2002 this scenic outdoor destination has played host to thousands of golfer lovers seeking to experience the best of Arizona.  With 20,000 square feet of teeing space, manicured fairways, world-class cuisine and a relaxing club house, visitors will feel at home in the comfort and luxury of this back nine destination. The challenging course is as ideal for long-time lovers of the sport as it is for newbies and breathtaking views of Sedona’s red rocks and national forests insure travelers get to experience the best of Arizona when they tee up. 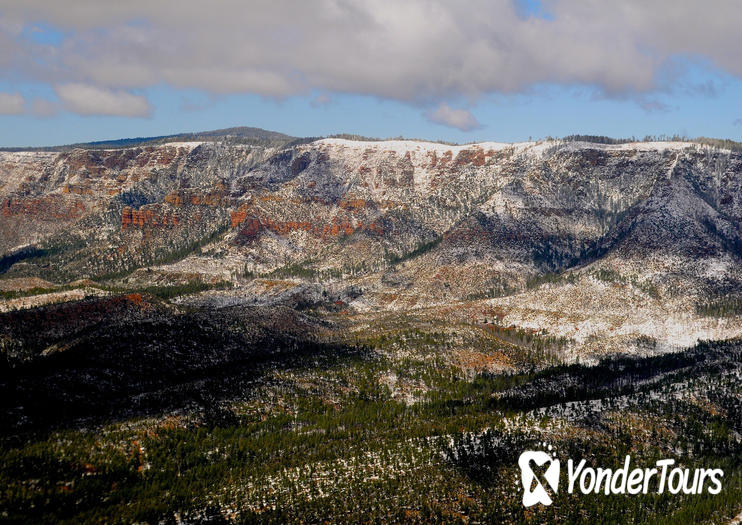 Sky-high cliffs of pale limestone and sandstone give this spectacular natural wonder its recognizable color. Its shaded canyons, creeks and ledges, juxtaposed with brilliant blue skies and lush green plains, make for breathtaking photo ops of the American Southwest. Travelers can wander the Ponderosa Pine forests and revel at age-old growth here, or navigate the trails that follow Fossil Creek Canyon and Pine Canyon through impressive landscapes and breathtaking beauty. After exploring the Mogollon Rim, visitors can explore the nearby towns of Payson or Sedona, where red rock culture, Native American influence and desert life give way to an almost spiritual existence for residents.

Mogollon Rim is located in the town of Pason and stretches from Yavapai County to the border of New Mexico. The rim forms the southern edge of the Colorado Plateau.
Address: Arizona, USA
From $ 109 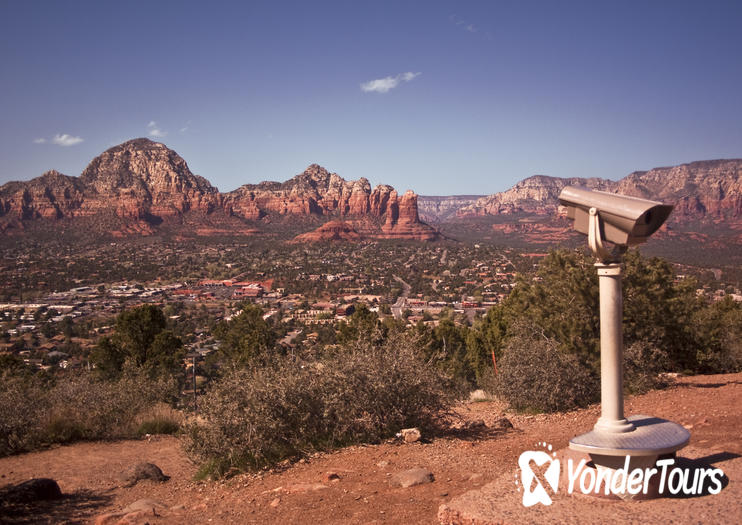 Airport Mesa is more than its quirky name suggests. The scenic trail loop guides travelers along well-marked paths that lead to panoramic views of the city’s iconic red rock landscape. Outdoor enthusiasts agree Airport Mesa is one of Mother Nature’s most impressive local wonders, but with occasional old-school aircraft flying overhead, there’s still a nod to some modern marvels, too.
The 3.5-mile loop has just a 200-foot elevation change, but its uninterrupted views of Courthouse Butte, Bell Rock, Cathedral Rock, Cockscomb and Chimney Rock make it one of the area’s most scenic treks.

The Airport Mesa Trail is located off of 89A west near Airport Road. There is plenty of parking at the trailhead. The hike can be slippery after rains, so it’s best to proceed with caution.
Address: Sedona, Arizona, USA
From $ 39 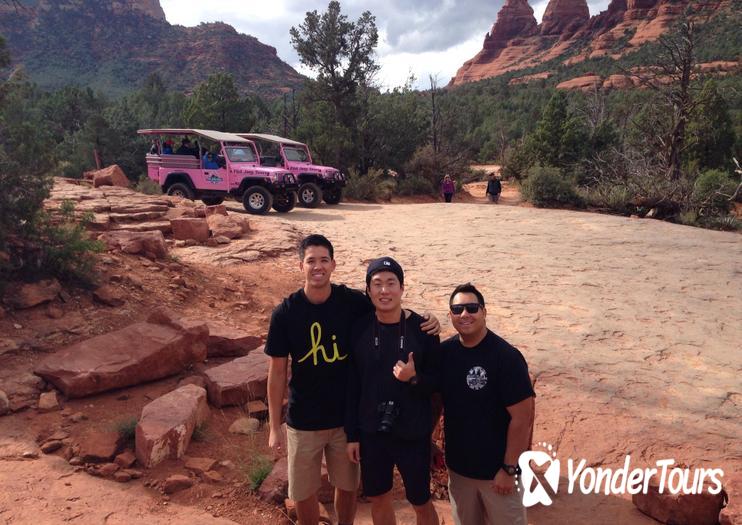 This 4.5-mile round-trip hike is a favorite among locals and travelers because of its incredible red rock views, challenging terrain and easy access from Sedona's main roads. But visitors warn its popularity means the trail is usually crowded with hikers, bikers and 4x4s. While the moderate climb is a good option for fit travelers, those who fear descending the Devil's Staircase can opt for one of the area's off-road Jeep tours.

The Broken Arrow trailhead is located off a Morgan Road in Sedona. The hike takes approximately two hours to complete.
Address: Sedona, Arizona, USA
From $ 121