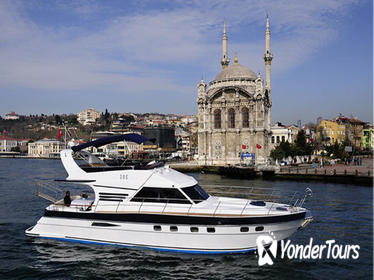 Private: Romantic Evening Cruise on the Bosphorus on Your Own Yacht

$ 462
2 Hours Dinner Cruises Free Cancellation
Cosy up for a romantic evening on-board your own private yacht, as you float past the glittering city lights on this 2-hour Istanbul night cruise. Sail out along the Bosphorus and enjoy views of both the European and Asian sides, including landmarks like the Dolmabahce, Ciragan and Beylerybeyi palaces, the Anadolu and Rumeli Fortresses and the distant minarets of Hagia Sophia and the Blue Mosque.
View Tour 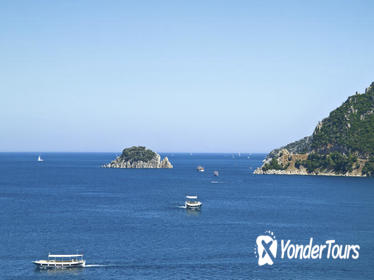 $ 92
10 Hours Day Cruises Hotel Pickup Offered Free Cancellation
Sail between two continents and into the Black Sea on this full-day cruise along the Bosphorus Strait from Istanbul, with an onboard guide, plus a delicious included lunch on deck. Gaze over the shores of Europe and Asia as you cruise along the Istanbul Bosphorus; stop to visit the city's pretty Ortaköy neighborhood; and enjoy guided tours of the ornate KÃƒÂ¼çÃƒÂ¼ksu Palace and Rumeli Fortress. Lastly, moor at the picturesque Black Sea village of Poyrazköy with time to swim in the sea; or explore the medieval castle of Anadolu KavaāŸā±.
View Tour 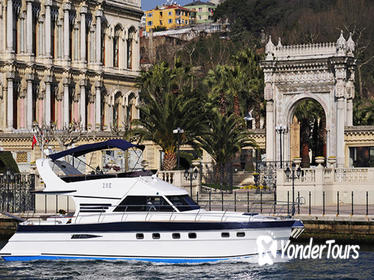 Anadolu Kavagi Cruise by Private Yacht - Half Day from Istanbul

$ 636
4 Hours Day Cruises Free Cancellation
Set sail for the Black Sea coast on a private half-day cruise and live the VIP life for a day as you sip cocktails (extra charge) and sunbathe on-board your luxurious yacht. Enjoy prime views of Istanbul's waterfront sights as you glide past the grandiose Dolmabahçe and ÃƒÂ‡iraāŸan Palaces, the landmark Bosphorus Bridge and the striking Ortaköy Mosque. Stop for lunch (not included) in the lively fishing village of Anadolu Kavagi, at the mouth of the Black Sea, before cruising back to Istanbul.
View Tour

$ 122
5 Hours 4WD, ATV & Off-Road Tours Hotel Pickup Offered Free Cancellation
Spend a half day exploring the Bosphorus and the Black Sea on this cruise from Istanbul. You'll see all of the area's top landmarks in just a half-day, including the Mainden's Tower, Anadolu Kavagi, the Rumeli Fortress, and others. Dig in to a buffet lunch while you watch the scenery pass by; this cruise includes hotel pickup and drop-off for an all-inclusive experience.
View Tour

$ 100
5 Hours Day Cruises Hotel Pickup Offered Free Cancellation
Take a breather from Istanbul's crowds and enjoy lunch on the water on this 5-hour Bosphorus and Black sea sightseeing cruise. Glide by landmarks such as the Rumeli Fortress and Bosphorus Bridge, and sail onto the Black Sea to swim at the fishing village of Poyrazköy or see the medieval castle at Anadolu KavaāŸā±. An onboard Turkish lunch, snacks and hotel pickup and drop-off are included.
View Tour

$ 226
2 Hours Day Cruises Hotel Pickup Offered Free Cancellation
Have a luxurious Istanbul experience aboard a private yacht. Transfer from your hotel or cruise ship and head out onto the Bosphorus Strait with your boat. Take in views of the Ciragan and Dolmbahce Palaces, Ortakoy Mosque, Rumeli Fortress, Anadolu Fortress, and historical Ottoman mansions. Enjoy tea and coffee onboard.
View Tour