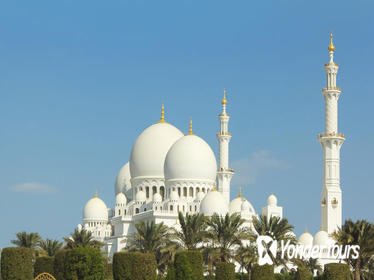 $ 45
4 Hours 30 Minutes Bus & Minivan Tours Free Cancellation
Experience three of the architectural and historical highlights of the UAE capital on a 4.5-hour city tour, with an expert guide. Traveling around the sites by air-conditioned vehicle, visit the Sheikh Zayed bin Sultan Al-Nahyan Mosque, usually known as the Grand Mosque. Explore the spectacular white marble building before visiting the Zayed Centre to learn about the late Sheikh Zayed, the UAE's first president. Lastly, step back in time at the Abu Dhabi Heritage Village, craft-making and a Bedouin camp showcase life before the oil boom.
View Tour 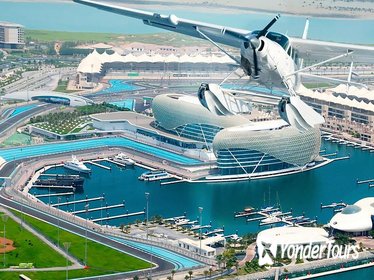 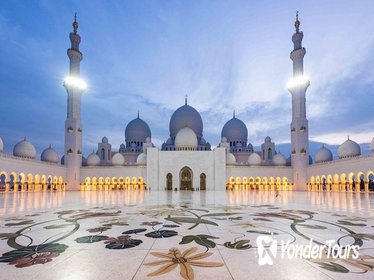 $ 68
8 Hours Day Trips Hotel Pickup Offered Free Cancellation
If you have time for one day trip from Dubai, visiting Abu Dhabi is a must. This guided tour rounds up the UAE capital's highlights with no sightseeing hassles on your part. Visit the Sheikh Zayed Grand Mosque, uncover Abu Dhabi's Bedouin culture at the Heritage Village, admire the cutting-edge architecture, and learn all about the city's rapid rise from fishing village to today's metropolis. Air-conditioned transport and hotel pickup and drop-off included.
View Tour 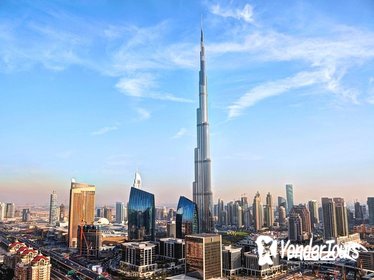 $ 199
5 Hours Attraction Tickets Hotel Pickup Offered Free Cancellation
Dubai City Tour offers a wide horizon of some of the city's beautiful landmarks.In this tour views of some of the oldest buildings in Dubai,full traditional wind towers ( the earliest form of air-conditioning) , Dubai Museum, traditional Abra(water taxi).Sheikh Saeed Al-Maktoum's house, the Heritage village, magnificent Jumeirah Mosque, which is a fine example of modern Islamic architecture built in 1979.At the end of the tour will have opportunity to explore the gold market, where it will be revealed why Dubai is called the " the City of Gold ". At the end tour will move towards Burj Khalifa, which is one of the tallest tower in the world. Burj Khalifa was opened in 2010 as part of a new development called the Downtown Dubai. It is designed to be the centerpiece of large-scale, mixed-use development.
View Tour 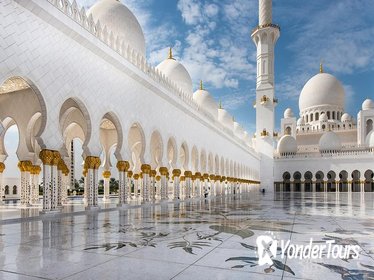 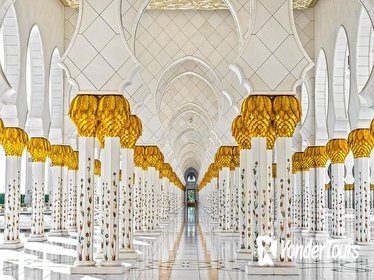 $ 62
4 Hours Cultural Tours Hotel Pickup Offered Free Cancellation
Explore the city of Abu Dhabi, the capital of the Emirates, on this guided tour. Following stops at the impressive Sheikh Zayed Grand Mosque and Sheikh Zayed Centre, stroll along the city's waterfront known as City Corniche and see the Emirates Palace and Etihad Towers. Following lunch (at own expense), visit the date market and Yas Island, where the Ferrari World park is located.
View Tour 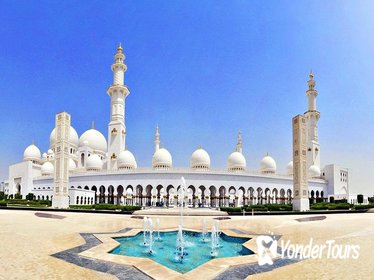 $ 40
9 Hours Day Trips Hotel Pickup Offered Free Cancellation
Get to see Abu Dhabi while you're in Dubai on this small-group full-day tour. Travel through the desert to the UAE's capital and discover its highlights as you learn about its history and culture. Explore the Sheikh Zayed Grand Mosque and Heritage Village, dip into the Dates Market, see the President's Palace and Emirates Palace hotel, stop for photos of Ferrari World on Yas Island, and more. Air-conditioned transport and hotel pickup and drop-off included.
View Tour 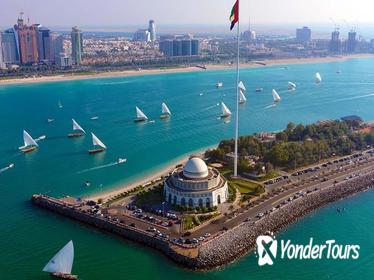 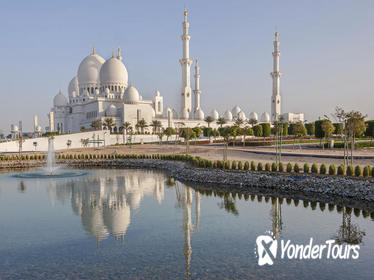 $ 52
4 Hours City Tours Hotel Pickup Offered Free Cancellation
Explore top attractions in the UAE's capital on this 4-hour Abu Dhabi sightseeing tour. Travel through Abu Dhabi by air-conditioned coach as a guide sheds light on the region's rich culture and heritage. Marvel at the soaring domes and minarets of Sheikh Zayed Mosque. Mingle with the locals in the bustling souks, where everything from gold jewelry to fresh dates has a price to barter on. Then, travel past the corniche's pristine gardens and beaches to the Heritage Village, where the Abu Dhabi of old is brought to life.
View Tour 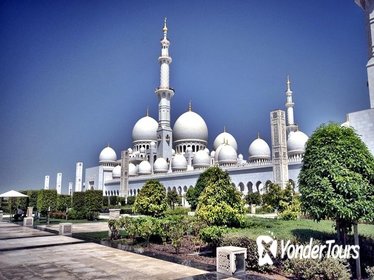 $ 125
1 Day City Tours Free Cancellation
Explore glittering Abu Dhabi, the United Arab Emirates' capital, on this 7-hour trip from Dubai, with a local guide. Travel along Dubai's skyscraper-lined Sheikh Zayed Road and journey south to Abu Dhabi, whose high-rises rear imperiously from the desert. Admire top landmarks including the Corniche and Emirates Palace hotel, and visit the Sheikh Zayed Mosque, one of the world's biggest. Learn about Emirati life before the 1950s oil boom at the Abu Dhabi Heritage Village; and see Yas Island, home to cutting-edge attractions including an F1 circuit and Ferrari World.
View Tour 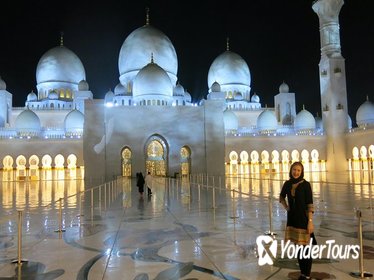 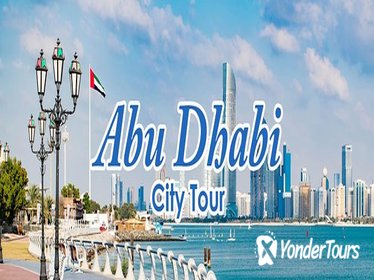 Abu Dhabi sharing City Tour - A journey to The Capital 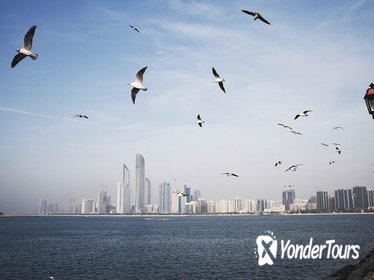 $ 96
8 to 10 Hours Day Trips Hotel Pickup Offered Free Cancellation
History meets modern  glamour in this tour.  Visit the Sheikh Zayed Grand Mosque that towers above the city, stroll through the date market and dhow yard, and tour the Heritage Village and Museum of Abu Dhabi. On the glitz side, you'll have the chance to take pictures at the opulent Emirates Palace Hotel and Yas Island Ferrari World, and drive along Corniche Road. Includes pick-up and drop off in Dubai or Abu Dhabi.
View Tour 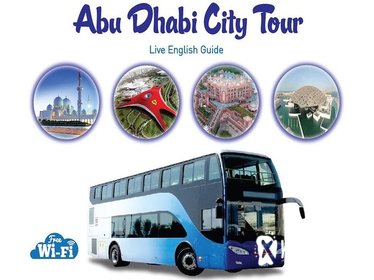 $ 95
9 to 11 Hours Cultural Tours Hotel Pickup Offered Free Cancellation
As the only company offering a Double Decker Bus from Dubai to Abu Dhabi, you may have a unique experience in discovering the beauty of the city. Our upper deck will give the best sights, best photo takings, and convenience that everyone is aspiring.  Our professional local guide will make your journey very pleasant and memorable. Option of lunch in a 4* hotel is available. Water and juices are free on board. Places to be visited are Grand Mosque, Mirage Art Museum, Heritage Village, Emirates Palace photo taking, Traditional Date Market, and Ferrari World photo taking. Other nice places for passing views are, Coin Tower, Lean Tower, Presidential Palace, Abu Dhabi Corniche, and Louvre Museum.
View Tour 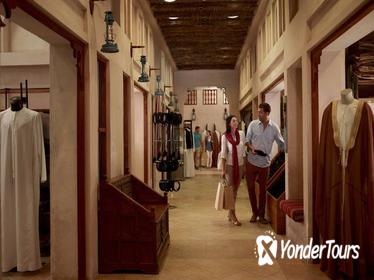 $ 73
4 Hours Private Sightseeing Tours Hotel Pickup Offered Free Cancellation
Choose your adventure in Abu Dhabi on this 4-hour private sightseeing tour. In the company of a dedicated guide, plan out the way you'd like to see the city and take off in your comfortable, air-conditioned vehicle. This private tour ensures personalized attention and includes pickup and drop-off from your Abu Dhabi accommodations.
View Tour 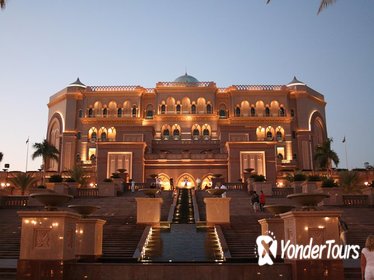 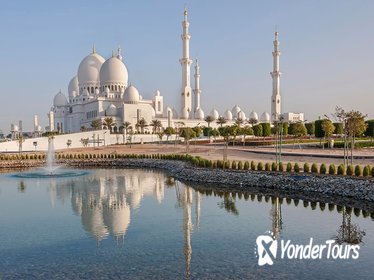 $ 60
8 Hours City Tours Hotel Pickup Offered
Take a swing through the top attractions in Abu Dhabi during this 10-hour day trip from Dubai. Discover the religious traditions of Abu Dhabi at the city's recently-completed Grand Mosque. Then continue with some retail therapy at the Abu Dhabi Yas Mall, where you'll catch a glimpse of Ferrari World, the theme park dedicated to all things car. Finish the day with a trip back in time to a museum on the life of the late Abu Dhabi ruler Sheikh Zayed and to Heritage Village, a recreation of a historic emirates-style city. Your trip also covers a guide, entrance fees and round-trip hotel transport.
View Tour 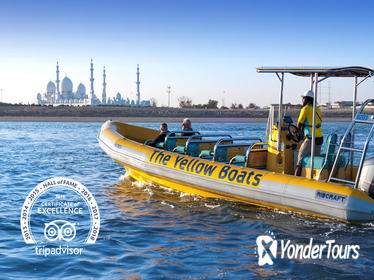 $ 45
1 Hour Day Cruises Free Cancellation
See the skyscrapers and sights of Abu Dhabi from a brilliant yellow RIB (rigid-inflatable boat) on this 60- or 90-minute cruise. With a skipper at the wheel, hold tight and enjoy the sea spray as your boat bounces across the waters of the Arabian Gulf along Abu Dhabi's shores. Stop for photos of the high-rises along the palm-lined Corniche; zip by Lulu Island, the Heritage Village, and spectacular Emirates Palace hotel; and watch for pods of dolphins in the sea as you listen to the commentary on board.
View Tour 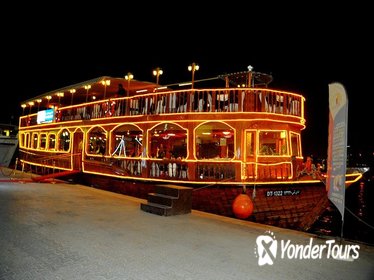 $ 70
3 Hours Dinner Cruises Hotel Pickup Offered Free Cancellation
Spend an enchanting moonlit evening on Dubai Creek on a 2-hour 'dhow' Arabian boat dinner cruise. Step aboard a beautifully lit-up wooden dhow built in traditional Arabic style, and admire the views of floodlit towers and other landmarks as you cruise along the creek. Glide by the illuminated Sheikh's Palace, Heritage Village and more, and savor a mouth-watering international buffet accompanied by unlimited drinks and live entertainment. Romantic for couples and ideal for families, the dinner cruise includes hotel pickup and drop-off.
View Tour 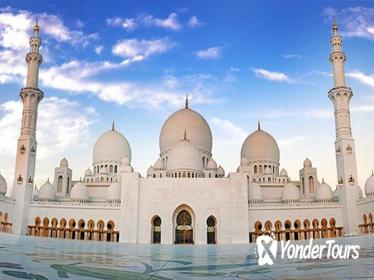 $ 250
5 Hours Private Sightseeing Tours Hotel Pickup Offered Free Cancellation
Experience the best of Abu Dhabi with the benefit of your own guide to provide the insights you want on this private half-day tour. Travel by private air-conditioned vehicle and spend as much or as little time as you wish at highlights including the Sheikh Zayed Grand Mosque, Corniche, and Heritage Village. Plus, select your departure time and add stops such as Yas Island for a tour that's fully customized to your needs and interests.
View Tour