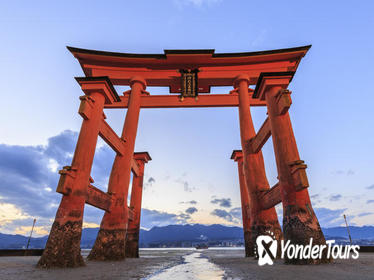 2-Day Hiroshima Tour from Osaka Including Miyajima and Okayama

$ 723
2 Days Overnight Tours
Leave Osaka to see some of Honshu's most hallowed and holy sites on a 2-day tour. First, ride by boat to Itsukushima Shrine in Miyajima, and then visit the nearby Hiroshima Peace Memorial. The monument is UNESCO listed, and affords sights of the atom bomb's aftermath through exhibitions at the museum. Check in to the Hotel Granvia Hiroshima, and then enjoy guided tours of Kurashiki Bikan Historical Quarter and the Okayama Korakuen Garden the following day. Lunch on Day 2 is included, but all other meals are payable at your own expense.
View Tour 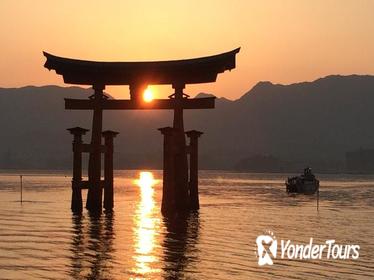 $ 348
13 Hours Day Trips Hotel Pickup Offered
See the historical highlights of Hiroshima on a comprehensive full-day tour from Osaka, led by a knowledgeable guide. Ride on the super-speed bullet train to Hiroshima then board a boat to the idyllic Miyajima Island, home to the splendid Itsukishima Shrine. Return to Hiroshima to feel emotionally stirred by the magnificent Hirsohima Peace Memorial Park and Museum, in which intriguing exhibitions speak eloquently of the atomic bomb dropped on the city in 1945. Fully immerse yourself in Japan's fascinating culture during this enriching excursion. Enjoy convenient transportation from a central Osaka location on this tour.
View Tour 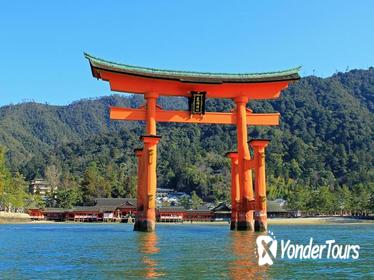 $ 127
7 Hours 30 Minutes Cultural Tours Hotel Pickup Offered Free Cancellation
This day trip to Hiroshima and Miyajima is the easy way to see many sights in a single day, some of which are UNESCO World Heritage sites. Travel by comfortable air-conditioned coach to important World War II-era places in Hiroshima, and the iconic red gates of Miyajima's Itsukushima Shrine, which appear to float on water. You'll learn all about the history and culture of these attractions from your English-speaking guide and through an audio-guide on board your bus.
View Tour 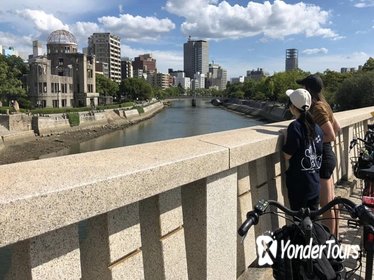 $ 32
3 Hours City Tours
NOW ON SALE 50%OFF!! First-Come, First-Served ONLY for 100 people so early booking is recommended. Go around Hiroshima's atomic bomb heritages by bicycle with a local guide. This is a tour where you will go around the atomic bomb heritages in Hiroshima as well as places related to peace. A guide born and raised in Hiroshima will lead the way. Ã£Â€ÂHIGHLIGHTSÃ£Â€Â‘ - You will be guided to the hidden points where you can see the 'real' Atomic Bomb Dome. - Let's go to the places that were really far away from the place of impact but that still suffered enormous damage. - A peace tour where you can go around local places and learn about things which you won't understand by only visiting the Peace Museum.  - Sense the feelings of Hiroshima's inhabitants and the story of Hiroshima through the local guide from Hiroshima.
View Tour 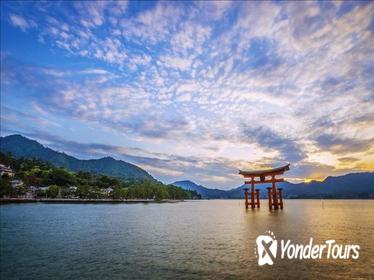 $ 543
7 Hours Private Sightseeing Tours Hotel Pickup Offered
See the highlights of Hiroshima and nearby Miyajima on this convenient day tour, which is ideal for travelers short on time in this part of Japan. Don't waste time on trains or buses; on this tour you'll be escorted in a private, Wifi-equipped vehicle. Visit some of the most iconic sites in Japan, including the Hiroshima Peace Memorial Museum and Itsukushima Shrine. This is a great introduction to Japanese culture and history for first-time visitors to Hiroshima.
View Tour 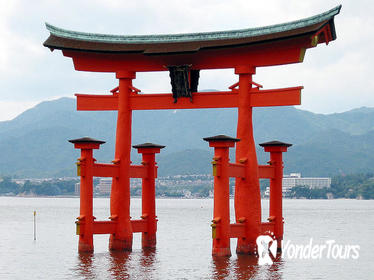 $ 561
6 Hours Private Sightseeing Tours Hotel Pickup Offered Free Cancellation
If you have a short time in Hiroshima and want to make the most of it, a comprehensive tour is the way to go. Visit Hiroshima's most iconic sights by private car; don't waste time waiting or navigating. From Miyajima's floating vermilion tori gate to the Peace Memorial Park, you will get a thorough picture of this historic city before return to your hotel.
View Tour 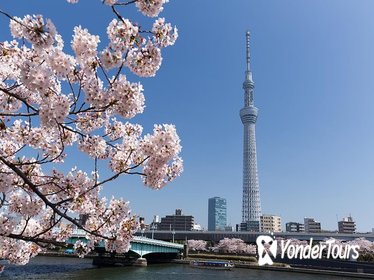 $ 4,230
11 Days Cultural Tours Free Cancellation
This whirlwind Sakura tour is the perfect way to get the most out of your Japan trip. You'll travel in comfort on a private coach, and visit 8 UNESCO World Heritage Sites including Mt. Fuji, Nara and Hiroshima. Save time waiting in lines, as all entry fees are included and you'll visit many top attractions such as Asakusa, and Kinkakuji temple. Your private guide will ensure you don't get lost, and accommodation is included too.
View Tour 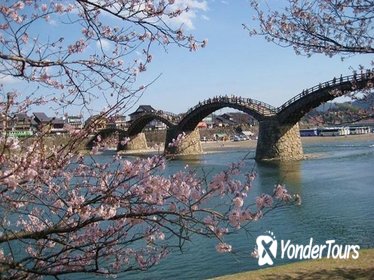 $ 146
8 Hours Day Trips Hotel Pickup Offered
If you've got limited time in Hiroshima, ensure you tick off all of the city's top attractions on a private 8-hour tour, which includes hotel pickup and drop-off. In a small group limited to six people, you'll visit the UNESCO-listed Itsukushima Shrine on Miyajima Island, and Kintaikyo Bridge. Opt to take a ropeway to Miyajima's highest mountain (own expense) and spend time reflecting at the Hiroshima Peace Memorial Park.
View Tour 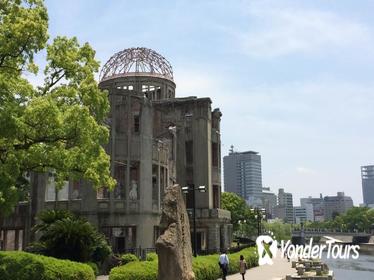 $ 348
12 Hours Day Trips
Travel round-trip from Kyoto by high-speed bullet train to take in Hiroshima's historic sites, including exhibits about the 1945 atomic bomb that devastated the city. Start your visit on a lighter note, traveling by boat to Miyajima, a famously beautiful island that is home to the revered Itsukushima Shrine. Have lunch there, then return to the city to visit the Hiroshima Peace Memorial Park and Museum. Your expert guide shares important details about Hiroshima's heartbreaking history and remarkable recovery throughout this unforgettable 12-hour tour.
View Tour 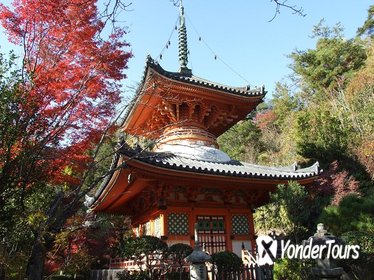 Private Customized Sightseeing Tour in Hiroshima with a Guide

$ 116
8 Hours Full-day Tours Hotel Pickup Offered
See the best of Hiroshima with the help of a private guide thanks to this 8-hour group trip for up to 6 participants. Learn about the solemn events of Hiroshima's atomic bomb attack at Peace Memorial Park, enjoy the idyllic surroundings of Mitaki-dera Temple, and check out Hiroshima-jyo Castle and Shukkei-en garden. All entrance fees are also covered.
View Tour 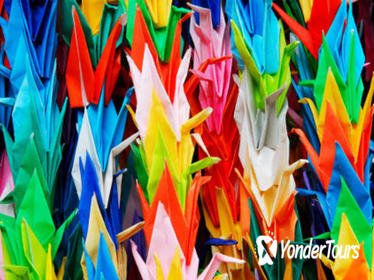 $ 139
7 Hours City Tours
Discover two of Japan's most spectacular sights on a captivating tour of Hiroshima and Miyajima's UNESCO World Heritage-listed sites. Accompanied by a knowledgeable guide, explore the impressive monuments of Miyajima Island, famed for its sacred Itsukushima Jinja Shrine, whose red tori gate appears to be protruding from the sea during high tide. Continue onto the Hiroshima Peace memorial Park, a moving expanse dedicated to promoting peace around the globe. Enjoy a tranquil ferry ride and absorb the natural splendor of the region's scenery on this enriching excursion.
View Tour 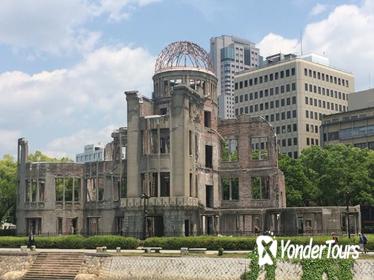 2-Day Hiroshima Tour from Kyoto Including Miyajima and Kurashiki

$ 732
2 Days Overnight Tours
Discover some of Japan's UNESCO-listed wonders on a 2-day tour of Okayama, Miyajima and Hiroshima from Kyoto. With accommodation at Hiroshima's Hotel Granvia included, the action-packed tour also takes in the Shinto shrine of Itsukushima, Hiroshima Peace Memorial's Genbaku Dome, and the history-steeped quarter of Kurashiki Bikan. Tour the Ohara Museum of Art to see Western masterpieces in a Japanese gallery, and enjoy included public transport through the experience.
View Tour