Things to Do in Mongolia

Choose from 10 Fun Things to Do in Mongolia 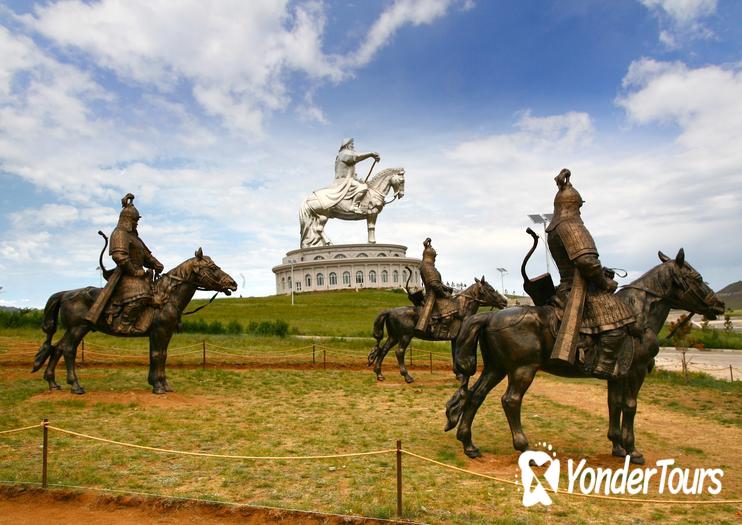 Located some 54 kilometers outside Mongolia’s capital city, the Genghis Khan Statue Complex is home to the largest equestrian statue in the world, and covered in 250 tons of steel. The iconic figure pays homage to the nation’s most famous ruler and is surrounded by 36 impressive columns that represent each of the Khaans who once called Mongolia home.
Travelers who venture to this must-see destination can take an elevator to the top of the back of the horse, stroll along a pathway that leads to the horse’s head and marvel at some of the most impressive views outside the city limits. Some 200 gers—the traditional circular houses nomadic people live in—dot the statue complex. Visitors can learn about local lifestyles, traditions and culture as they wander through the homes.
Tourists can venture to the complex on their own, or as part of a tour that showcases the history of Genghis Khan and the great nation of Mongolia.

The complex is located about 90 minutes outside of Ulaanbaatar. Visitors can hire a taxi from the city, or make the journey with one of the city’s local tour companies. Because much of the literature on site is not translated to English, a local guide can be helpful.
Address: Ulaanbaatar, Mongolia
From $ 38 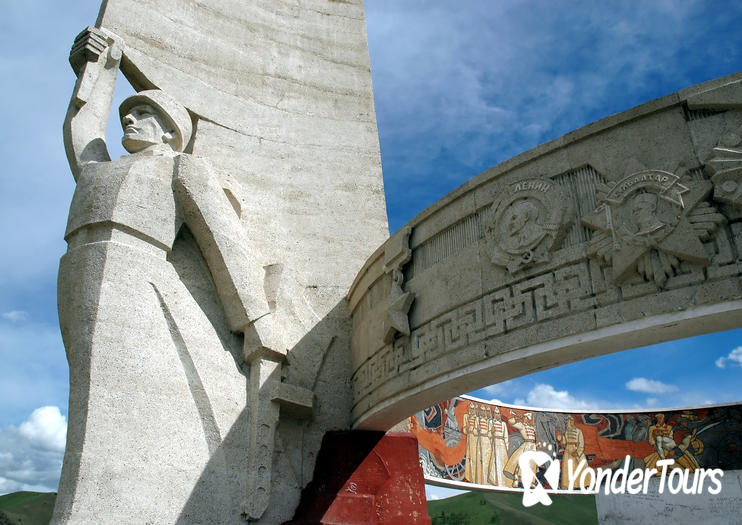 This iconic landmark known as the Zaisan Memorial was built by the Russians to honor unknown soviet soldiers killed in World War II. At the top of a long stretch of 300 stairs, visitors will find bold and colorful paintings depicting the connection between Mongolia and the USSR. Images span the time between Mongolia’s independence and the victory over Nazis.
While the brightly colored paintings are a part of what drives tourists outside the city and up some serious flights of stairs, it’s the epic panoramic views of Ulaanbaatar that make Zaisan Memorial truly worth the trip. Visitors will also find an old tank memorial located at the bottom of the hill, which includes a map of the tank’s travel from Mongolia to Moscow.

Zaisan Memorial is free to enter and open 24-hours daily. It is located just beyond the southern city limits and can be seen from much of downtown Ulaanbaatar. It is possible to access the memorial by public transit using the number 7 bus from Bayangol Hotel or Baga Toir. 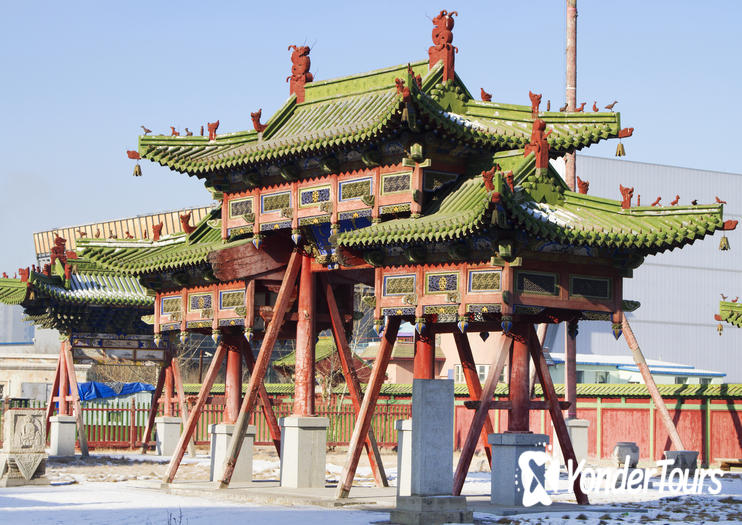 This iconic palace is the only remaining residence of the eighth emperor of Mongolia. Built in the late 1800s, this popular attraction is home to six temples, as well as living quarters, a shop and a well-kept garden.
Visitors can explore the temples, which are dedicated to gods and deitys and covered in colorful Buddhist artwork. The displays are some of the nation’s most impressive and certainly worth of checking out. Travelers who wander through the halls of the residence will also find a vast collection of the Bogd Khan’s personal effects and prized possessions, including a large collection of taxidermied animals that offer evidence of his unique hobbies and interests.
Because Bogd Khan Palace Museum is located en route to the Zaisan Memorial, it’s easy to check out both destinations on a city tour or quick half-day trip to the south side of Ulaanbaatar.

The Bogd Khan Palace Museum is located on the southern side of Ulaanbaatar on the road to Zaisan. 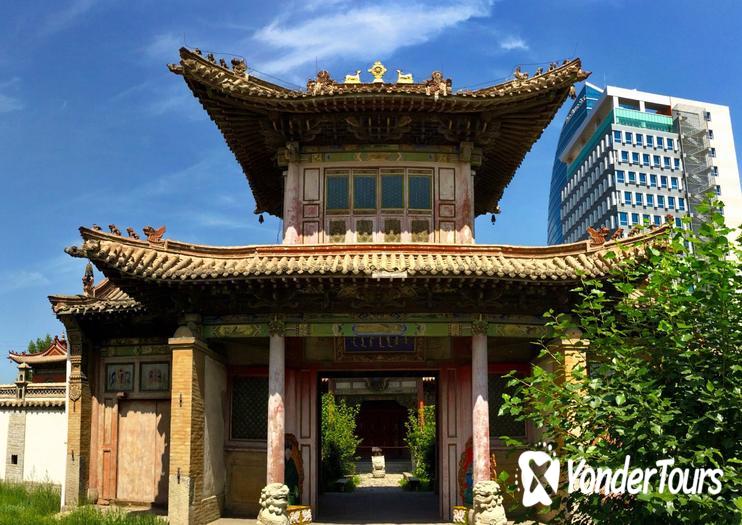 Few of Mongolia’s temples or museums offer travelers as much color, culture and history as the Choijin Lama Temple and Museum that’s located in the heart of Ulaanbaatar. This stunning landmark was once home to Luvsan Haidav Choijin Lama and opened in 1908. Like many places of worship, the temple closed when Mongolia fell under communist rule. And while religious freedom was returned to the nation in the 1990s, Choijin Lama Temple was converted into a museum, rather than a place of worship.
Visitors to this stunning destination will find five distinct temples dedicated to Buddhist teachers and various gods. The colorful rooms hold statues made of wood and bronze, portraits and religious deities, as well as paper machete masks and other items used in religious ceremonies.
Visitors can explore the temple museum on there own, or include it as a stop on a guided city tour. It’s close proximity to central Ulaanbaatar makes it an ideal stop for those exploring other museums or Genghis Khan Square. 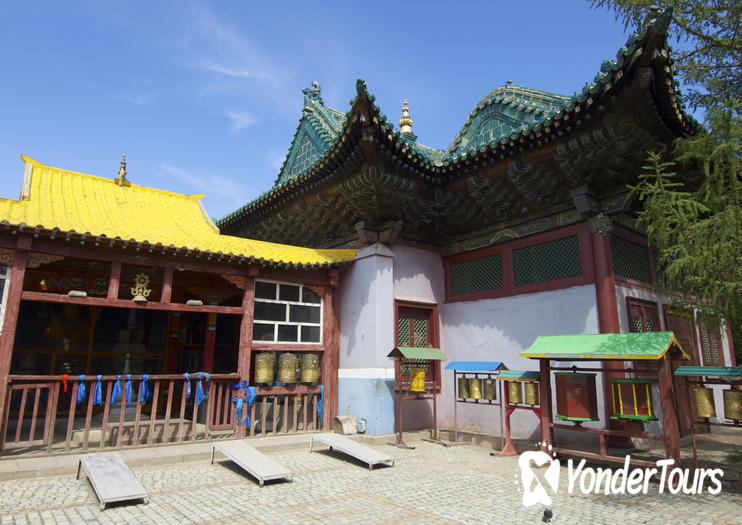 Founded in 1727, this classic Tibetan Buddhist monastery has been under protection of the Mongolian government since 1994. Some 150 monks call this place of worship, devotion and study home. And while many similar monasteries across the country were either in ruins or destroyed during communist rule, Gandantegchenling Monastery was somehow spared, making it a place of hope for locals who worship.
Travelers who venture to this vast religious complex will find a massive statue made of copper statue known as Avalokiteśvara that towers all the way to the ceiling in one of the ground’s most-popular structures. A series of colorful prayer wheels and a room for study and worship are among the monastery’s other buildings, but it’s a wooden pillar from the original temple structure that ranks tops among tourists. For locals, the single remaining pillar is a sign of strength, hope, luck and endurance, which makes it a destination Mongolians still to venture to.
Visitors can explore the monastery on their own or hire a guide to help explain more about the Buddhist culture and traditions. It’s possible to wander the grounds alone, or do so as part of a day tour of the city.

The monastery is a good place to spend a couple of hours during a day in Ulaanbaatar, and those in the know say arriving before 9am ensures the opportunity to see and hear monks praying during the early morning.
Address: Ulaanbaatar 16040, Mongolia
From $ 38 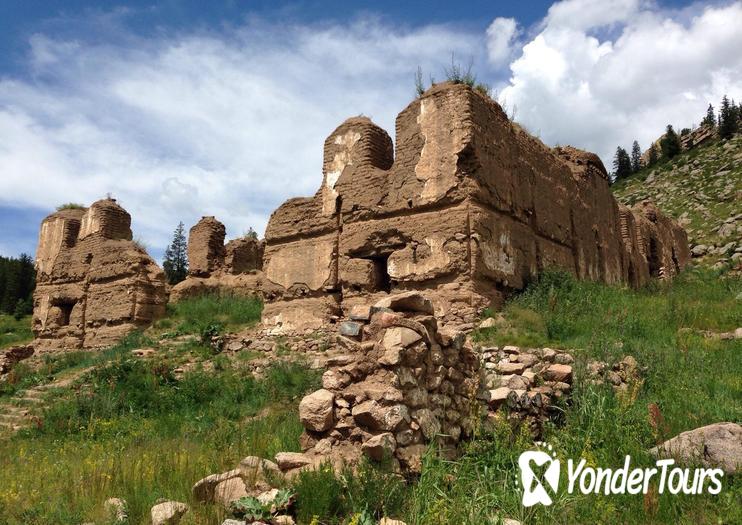 Built in 1733 and dedicated to Manjusri as the permanent home of the Reincarnation of the Bodhisattva of Wisdom, the Manzushir Monastery was once home to 20 temples and some 300 practicing monks. But this historic and cultural destination was among the hundreds of religious structures that were demolished during communist rule in the 1930s.
Visitors can check out the monastery ruins, located in an open space outside the city, and tour the reconstructed museum that showcases the religious structure in its original integrity. The Togchin temple ruins, which were built in the mid-1700s, as well as a massive two-ton bronze cauldron are also located nearby.
The Manzushir Monastery is an ideal stop for travelers who want to learn more about the history and culture of Mongolia’s diverse people, and perfect for exploring as part of a day tour of Ulaanbaatar.

The monastery is located 15 kilometers outside of Ulaanbaatar on the south side of Bogd Khan Uul Mountain.
Address: Ulaanbaatar, Mongolia
From $ 50 This stunning national park is one of the closest nature preserves to the capital city of Ulaanbaatar. As such, it attracts as many locals in search of a weekend away from urban landscapes as it does travelers in search of epic Mongolian landscapes. The third-largest park in the country, Gorkhi-Terelj is dotted with luxury camps, thick forests, rocky landmasses and stunning trails.
Visitors can opt for a variety of activities during a day or weekend visit, included horse back riding (the most traditional way to see the sites), mountain biking, camping and hiking. Whether it’s a quick escape from the city, or a weekend spent in a traditional ger, living like the locals, a visit to Gorkhi-Terelj National Park is the perfect way to experience rural Mongolia. 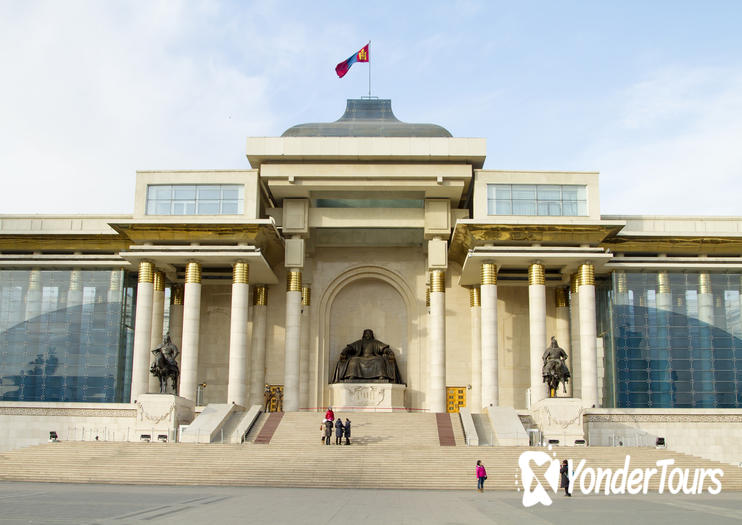 The iconic Genghis Khan Square, set in the heart of Ulaanbaatar, serves as a gathering space for travelers and locals alike. Once known as Sukhbaatar Square, its name was changed in 2013 as an homage to Mongolia's most famous ruler. Its central location makes the square an ideal place to begin exploring the city.
Visitors will find a massive statue of Genghis Khan near the entrance to the regal Government Palace, as well as a towering statue of Damdin Sukhbaatar, a fearless man who led the revolution of 1921. In addition to the vast open space that serves as a gathering area for locals, visitors can see the Mongolian Stock Exchange, Blue Sky Tower and the home of the Mongolian ballet from the center of the square.
Travelers who venture to Genghis Khan Square as part of a city tour will learn how this center-city spot served as the site of hunger strikes and political demonstrations in the 1990s.

The square is surrounded by some of Ulaanbaatar's most popular attractions and stately buildings, including the Blue Sky Tower on the south side, the Palace of Culture to the north, and the State Opera and Ballet Theater to the east.
Address: Ulaanbaatar, Mongolia
From $ 52 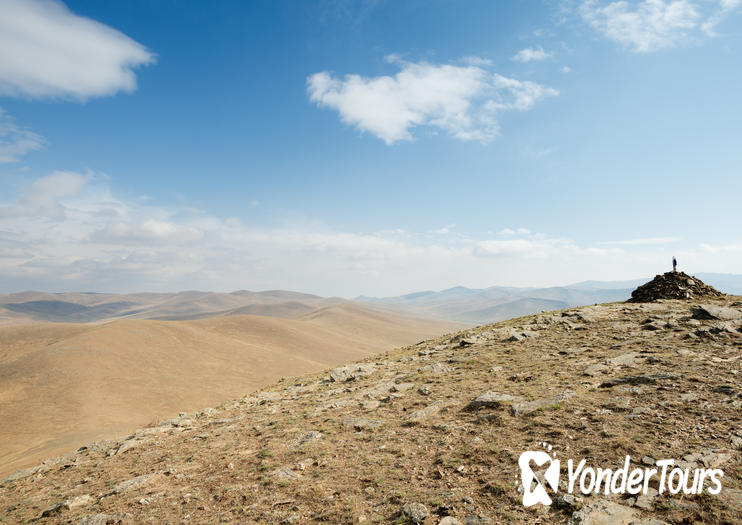 Mongolian government declared Hustai National Park a protected area in 1993 and since then, this mecca of outdoor beauty has been attracting visitors from across the globe. Home to one of the only wild horse populations on earth, the park is located on the western Mongolian steppe, about 95 kilometers from Ulaanbaatar.
In addition to wild horses, Hustai is home to an encyclopedic variety of plants and animals. Some 44 species of mammals call this vast land home, including wild boar, ibex and grey wolves. Lucky travelers may even spot the iconic (and elusive) golden eagle while navigating the plains.
Visitors also have the chance to stay in traditional gers—round felt houses used by nomadic Mongolians—at the Hustai Camp. And stops at local herder communities offer insight into the culture of rural Mongolians.

The park is located about two hour’s drive from the capital city. Day trips are available from Ulaanbaatar for those who are short on time but still want to experience the thrill of seeing wild horses in their natural habitat.
Address: Mongolia
From $ 80 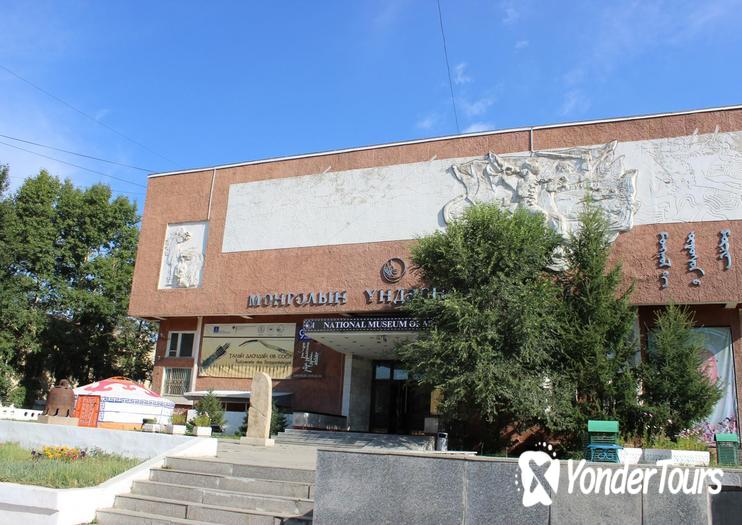 The Museum of Mongolia is one of the nation’s top attractions and also holds one of the country’s most comprehensive collections of cultural, historical, political and scientific materials. Since 1991 the museum has resided in its convenient city location, making it an essential stop for travelers staying in Ulaanbaatar.
Travelers will find exhibits on the Mongol Empire, as well as a vast history of the nation prior to Mongol rule. The country’s lengthy history is laid out in both ancient archeological findings, and contemporary artifacts and pieces. One of the museum’s most impressive collections is the display of traditional attire that showcases dress from each of the country’s ethnic groups.
Visitors can explore this museum on their own, or as part of a comprehensive day tour of Ulaanbaatar. It’s the perfect place to gain a general understanding of the culture, tradition and history of this vast land.

The museum is located on Juulchin Street-1 in Ulaanbaatar, not far from the city’s main square. It is open daily from 9:30am-6pm. Most literature is in both English and Mongolian, making this an easy museum to explore without a guide.
Address: Juulchin Street -1, Ulaanbaatar 210646, Mongolia
Hours: Daily 9:30am-6pm
From $ 38