Things to Do in Palawan

Choose from 4 Fun Things to Do in Palawan 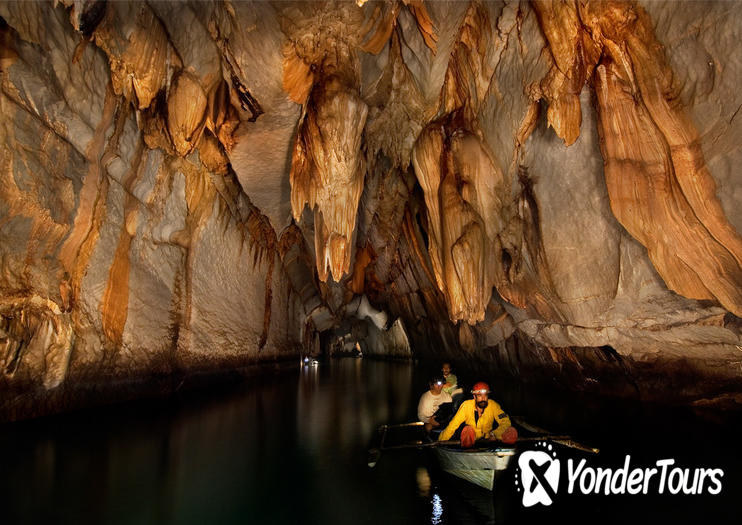 A new Seven Wonders of Nature, the UNESCO World Heritage–listed Puerto Princesa Underground River flows through a limestone cave system before spilling into the South China Sea. A paddle through this eerie ecosystem, filled with otherworldly cave formations and chattering bats, is one of the Philippines’ most unforgettable experiences.
The Basics
The Underground River, situated within Puerto Princesa Subterranean River National Park on Palawan, is an easy day trip from the city of Puerto Princesa. Take a guided boat ride along one of the world’s longest underground rivers, beginning at Sabang Wharf near the mouth of the cave. The rock formations within, considered among the most complex in the world, are illuminated only by flashlight beams. Some tours also include a stop at Ugong Rock for optional ziplining or spelunking.
Things to Know Before You Go
How to Get There
The Puerto Princesa Underground River is 90 minutes away from the city of Puerto Princesa by road. It’s a 15-minute boat ride from Sabang village to reach the entrance of the cave. Most visitors arrive by guided tour; alternatively several public buses run from the San Jose bus terminal to Sabang.
When to Get There
Boat trips can be cancelled due to rain and poor weather, so it’s best to visit the cave system during the dry season (January to April). This natural wonder is one of Palawan’s most popular attractions, so it’s a good idea to arrange your tour before arriving on the island, particularly during the peak season (December to May).
Biodiversity in Puerto Princesa Subterranean River National Park
While the river is the area’s star attraction, the surrounding national park supports impressive biodiversity, including some 800 plant species, 195 bird species, 19 reptile species, and 30 mammal species. While some of these critters are hard to spot, visitors commonly see some of the eight species of bat living within the park and its cave system.
Address: Puerto Princesa Subterranean River National Park, Puerto Princesa, Palawan, Philippines
Admission: Varies
From $ 45 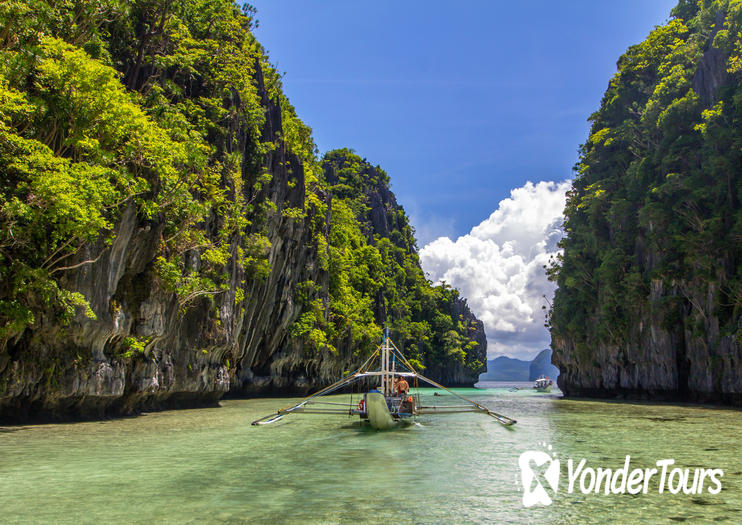 With its limestone cliffs, emerald green waters, and craggy karst formations, the Big Lagoon can almost seem fake—too beautiful to possibly be real. This isn’t some tropical dream, however, but an actual place with a placid lagoon that’s perfect for snorkeling and swimming.
From the moment you enter the Big Lagoon on an island hopping tour from El Nido, the rest of the world seems to fade away, unable to penetrate the cliffs, and there’s a moment of stillness, serenity, and calm as smooth as the tropical waters. If you choose to jump off the boat for a swim when visiting the Big Lagoon, take a second to look back at your boat and notice how small and toy-like it appears at the base of the towering cliffs. Everything here is grandiose, and it’s little wonder why the Big Lagoon is considered one of the most scenic spots in El Nido, the Philippines, and the world.
Insider's Tip: The water looks dark when you enter the lagoon, but the rich green waters are actually very clear—particularly when visiting in winter.

The Big Lagoon is on Miniloc Island and one of the stops on “Tour A.” El Nido’s tourist routes are regulated by the government, and are designed to help with overcrowding and protecting the natural resources. December-March is the best time of year to visit the Big Lagoon, with the wettest months being June-August, which are prone to heavy rains. Crowds can definitely be lighter, however, if you visit El Nido in the off-season.
Address: Big Lagoon, El Nido, Philippines
From $ 32 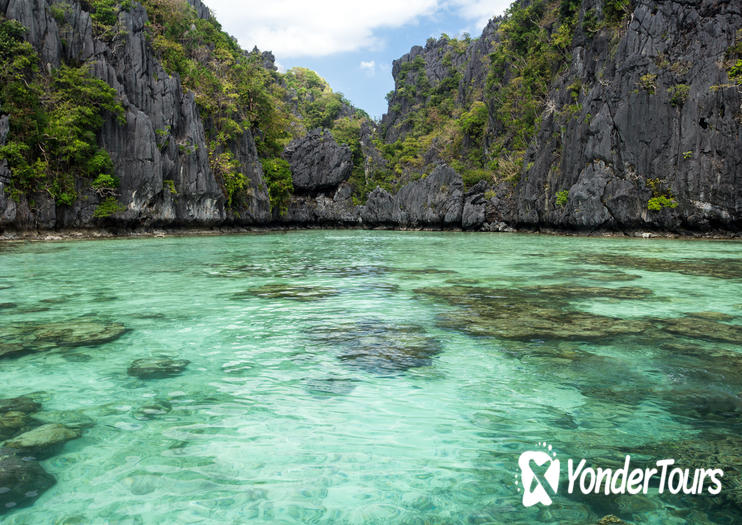 Much like the neighboring Big Lagoon, the Small Lagoon is a scenic cove where reality seems to meld with a place that’s out of a tropical dream. Unlike its larger cousin, however, the Small Lagoon offers added adventures like swimming in hidden sea caves, and squeezing through narrow holes in the rocks to access the placid waters. This spot is popular with kayaking tours since they can squeeze through the narrow openings, but it’s just as easy to swim through the channel and emerge in the tranquil lagoon.
Because of the shear, near vertical walls and towering karst formations, swimming or paddling through the Small Lagoon can make you feel like you’re on the set of a Hollywood action film. A place this naturally stunning, after all, couldn’t possibly be real, yet here it is just a boat ride away from impossibly gorgeous El Nido.
Insider's Tip: There’s a small sea cave toward the back of the lagoon where you can swim inside through the inky black darkness and go as far as you dare.

The Small Lagoon is on Miniloc Island just minutes from the Big Lagoon. It’s accessed as part of “Tour Route A,” and popular with El Nido island hopping tours that visit the scenic coastline.
Address: Small Lagoon, El Nido, Palawan, Philippines
From $ 32 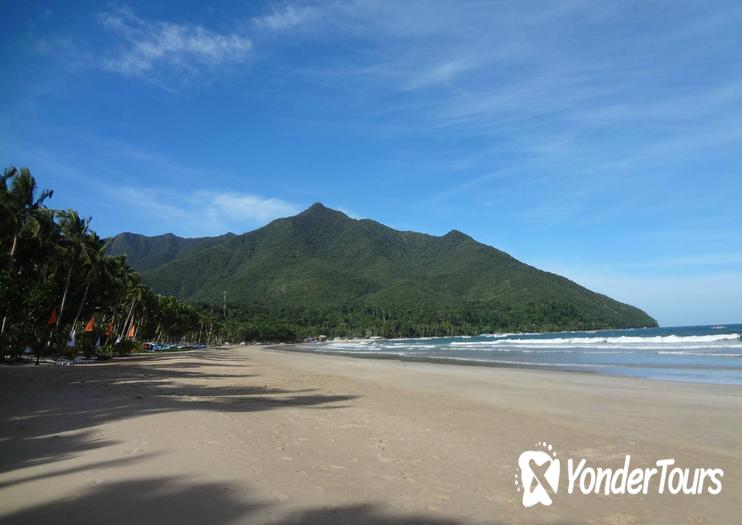 Sabang is a small fishing village on the western coast of Palawan. It is dominated by a long, wide stretch of white beach, framed by mountains and lapped by calm waters. The main attraction here is the Underground River, an intriguing river system full of stalagmites that runs beneath the forested mountainside and is one of the Seven New Wonders of the Natural World.
Tours to the Underground River tend to leave from Puerto Princesa and return the same day, but if you have time to linger in Sabang, you’ll find there’s more to it than its most famous attraction. The beach itself is pristine and devoid of crowds, making it easy to spend hours simply relaxing and enjoying the views. Those looking for more action can take a mangrove paddle boat tour at the eastern end of town, fly the Sabang Zipline, go climbing, explore caves, or take a dip in the pools of the Sabang Falls.
Booking an Underground River tour independently involves obtaining permits and often long waiting times for boats. If only visiting Sabang for the Underground River, avoid this by booking a day tour from Puerto Princesa. Some tours include a paddle boat ride as part of the itinerary.

If not arriving as part of an organized tour, you can take a shuttle van to Sabang Beach from the San Jose Terminal in Puerto Princesa. The journey takes two to three hours.
Did You Know? Sabang’s Underground River is one of the longest underground rivers in the world, with a total length of five miles (8km).
Address: Sabang Beach, Puerto Princesa, Philippines
Admission: Dependent on tour
From $ 46