Things to Do in Skagway

Choose from 7 Fun Things to Do in Skagway 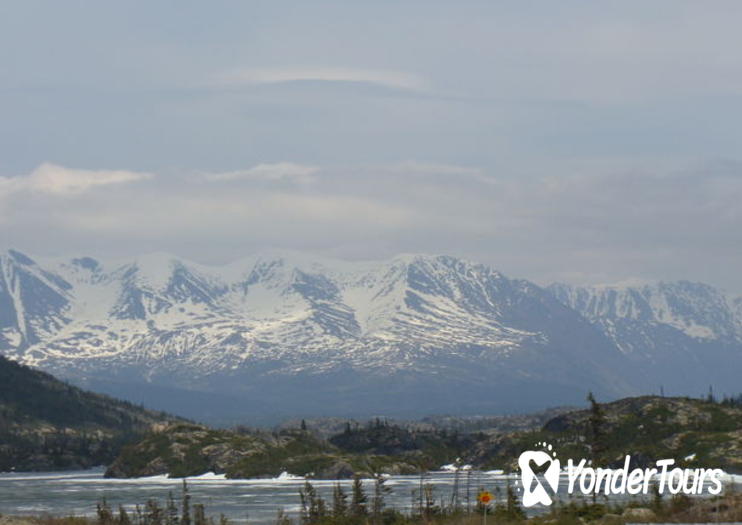 Inching up steep tracks carved into the sides of mountains, the narrow-gauge White Pass and Yukon Route Railroad is a fun, historic way to see spectacular scenery. A number of routes travel through White Pass, a mountain route that links the port town of Skagway, Alaska, with the Yukon Territory capital city of Whitehorse in Canada. Climb aboard this International Historic Civil Engineering Landmark and experience mountains, glaciers, waterfalls, and historic sites from the comfort of a century-old railcar along “the railway built of gold.”
The Basics
The scenic White Pass and Yukon Route Railroad offers three excursions, all of which begin in Skagway, Alaska. The White Pass Summit Excursion rises from Skagway to the White Pass summit, 2,865 feet (873 meters) high, while the Bennett Scenic Journey travels the length of Lake Bennett before arriving in the Yukon Territory, stopping in the old gold-rush town of Bennett Station en route. And the Fraser Meadows Steam Excursion features a historic steam locomotive that hauls passengers beyond the White Pass summit to Fraser, British Columbia. The train is most often experienced by cruise travelers as a shore excursion from Skagway.
Things to Know Before You Go
How to Get There
All White Pass and Yukon Route trains depart from Skagway, Alaska, about four hours north of Juneau by ferry. Ferries take equipment, freight, and passengers through the Port of Skagway, and many cruise ships stop right at Skagway—and a trip on this railroad is an extremely popular shore excursion.
When to Get There
The railroad runs from May to September and is extremely popular, so it’s best to book well in advance. Departure days and times for the three train routes vary depending on the day of the week, the season, and national holidays.
White Pass and Yukon Route Railroad History
Built in 1898 during the Klondike Gold Rush, the White Pass and Yukon Route Railroad is an International Historic Civil Engineering Landmark—a designation shared with the Panama Canal, the Statue of Liberty, and the Eiffel Tower, among others. The 110-mile (177-kilometer) narrow-gauge railroad was completed on July 29, 1900, in Carcross in the Yukon Territory. The route was built to connect the deepwater port of Skagway, Alaska, to Whitehorse in Canada. Today, a ride on one of the historic train routes ranks among Alaska’s most popular shore excursions—almost a half-million passengers take the trip each summer.
Address: 231 Second Avenue, Skagway 99840, USA
Hours: May - Sept. Reserve seats ahead of time. Some routes require a passport
Admission: Adults: US$85 - US$239, Children (3-12yrs): half price
From $ 51 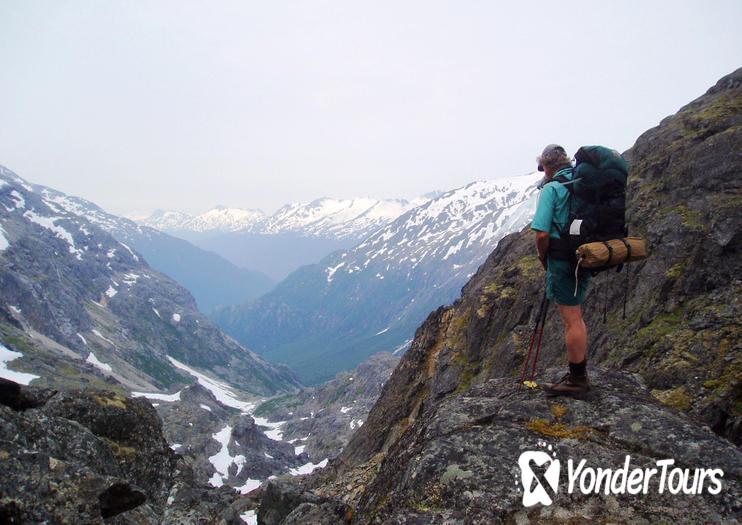 Following the Chilkoot Trail is to take a journey into the past, to the time before the gold-rush era of prospectors when the Tlingit people used the route to trade coastal products for pelts and plants with the people of the interior. The trail is a significant historic site, and has been described as ‘the world’s longest outdoor museum.’

The 33-mile (53km) trail is for walkers only, who take three to five days to follow the often difficult route that in gold-rush days was the most direct path from the port at Skagway to the gold fields of the Yukon. The route was shorter than White Pass but more deadly.

Prospectors taking the Chilkoot route were advised to carry a ton of gear and rations, enough to ensure self-sufficiency for one year. Alternative transportation systems devised to help carry their infamous ton of gear included aerial tramways, pack animals and Tlingit porters.

Hiking the Chilkoot Trail is such a popular recreational activity that permit numbers are limited during the peak season months of June to early September.

In Alaska, the Chilkoot Trail is part of the Klondike Gold Rush National Historic Park. Beginning at the bridge over the River Taiya near the town of Dyea (15 miles/24km from Skagway, the trail goes over the Coast Mountains and Chilkoot Pass to Lake Bennett in British Columbia.

There are nine official campgrounds dotted along the trail. To protect against attracting the unwanted attentions of bears along the route, food must be safely stowed and bear spray repellent carried.
Address: USA
From $ 79 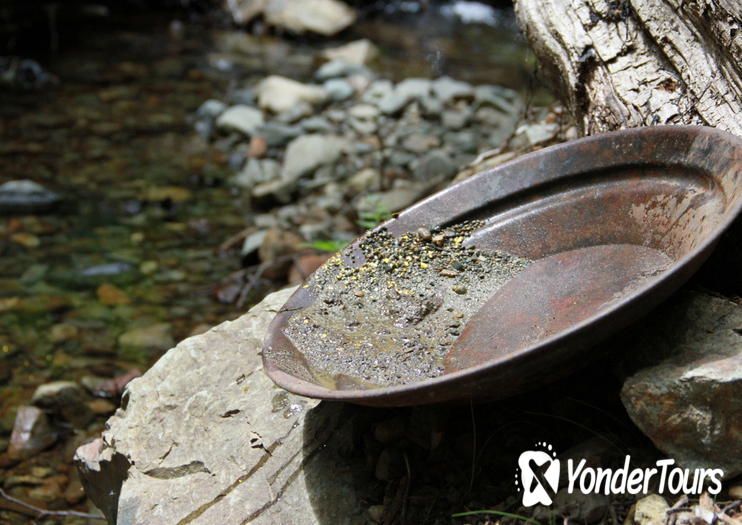 Located in Skagway, the Liarsville Camp brings Gold Rush history to the present. The camp offers a number of memorable experiences and is especially great for families wanting an educational yet fun experience. Along with its beautiful surrounding scenery that includes a waterfall and White Pass, the camp is also known for its salmon bakes. Meals at Liarsville are all-you-can-eat and consist of wood-fire grilled Alaskan salmon, chicken, rice, corn bread, pasta beans, salad and cake.
Even with the enticing food, the main draw is the gold panning experience. Visitors get to try their hand at the historic activity and can even keep their findings. The camp also has a comedic performance involving sourdoughs and dancehall girls that keeps the audience laughing and is complemented by a reading of the poem, "Bard of the North" by Robert Service, who was known for his Yukon-inspired poetry. Don't leave without exploring the old trail camp, which adds to the exposure to local history and culture that Liarsville provides. 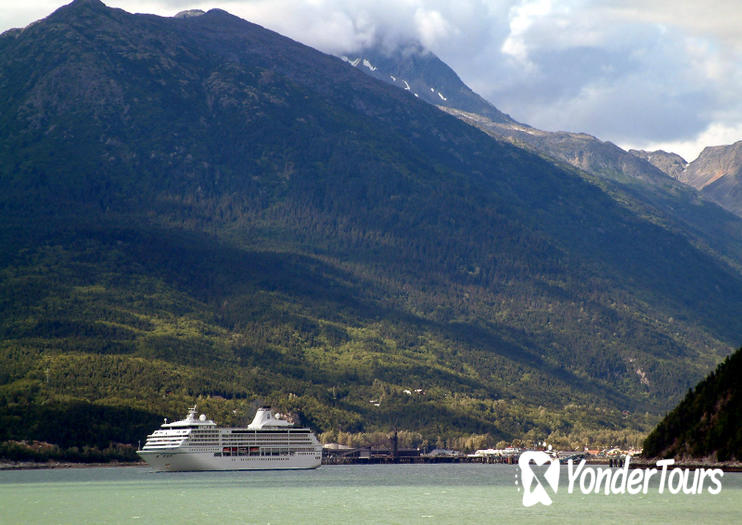 A century ago, Skagway was the gateway to the gold fields of the Klondike. Today, the scenic cruise port still has the feel of its Gold Rush past, complete with an historic downtown filled with false front buildings and wooden sidewalks. It’s one of Alaska’s most popular ports of call and a departure point for exploring the vast Yukon.
The Basics
Since Skagway is so small, it’s easy to explore in a single day—often with time leftover for an excursion further afield. Many travelers docking in Skagway head out on a half-day excursion across the border into the Yukon, Canada’s westernmost territory. No matter what side of the border you’re on, there are numerous ways to explore. Keep an eye out for wildlife during an ATV tour of the Mineral Mountain wilderness, trek the moderate Chilkoot Trail, learn about dog sledding at an Iditarod training camp, or take a picturesque ride along the White Pass Summit Railroad.
Things to Know Before You Go
How to Get to Skagway from the Skagway Cruise Port
Cruise ships drop anchor at three deep-water docks—the Broadway, Railroad, and Ore docks—all within easy walking distance of Skagway’s historic downtown. A small ferry dock just outside of town sometimes serves smaller vessels. Bus service takes passengers from the docks into town for a small fare.
Port Information
Credit cards are widely accepted in Skagway, but there’s also an ATM at a Wells Fargo bank on the corner of 6th and Broadway. The US dollar is the official currency.
Address: Broadway, Skagway, Alaska, USA
From $ 48 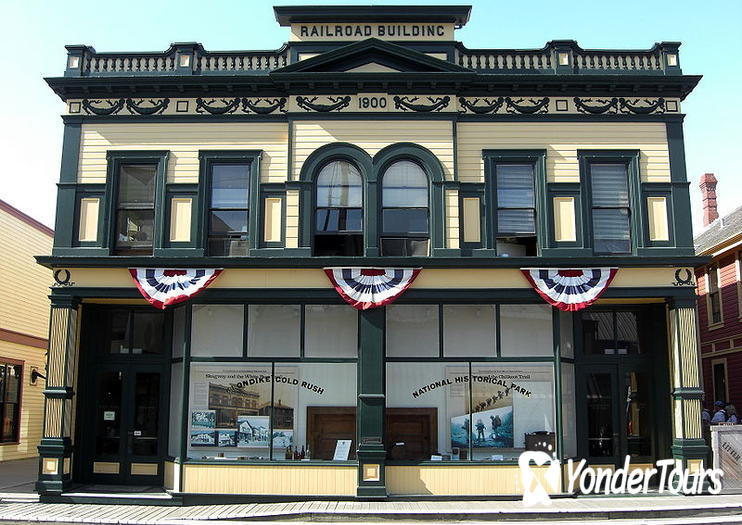 The Klondike is synonymous with the gold rush days of the late 19th century, when the frontier settlement of Skagway exploded from a population of just two to 20,000 in a mere 10 years.

The Klondike Gold Rush National Historical Park protects the memory of these days, preserving the trails, towns and buildings of the gold rush era. Skagway was the gateway town to the gold of the Klondike, which lay 550 miles (885km) north, near the junction of the Klondike and Yukon Rivers in Dawson City.

The Chilkoot Trail is the most famous of the gold rush routes followed by the miners, originally created by the Tlingit people. The park also preserves the downtown Skagway Historic District and its prized collection of authentic 100-year-old wooden buildings, including the fun Mascot Saloon and historic Moore House and Cabin.

Drop into the park's visitor center to watch the video about the area's gold rush history and pick up information about the local trails, including the famous Chilkoot Trail.

Rangers lead a range of activities, including walking tours and talks through the historic buildings and countryside.

Photo by Reywas92 sourced from WikiCommons

The Klondike Gold Rush National Historical Park is in Skagway, the northernmost point of southeast Alaska's Inside Passage.
Address: 2nd and Broadway, Skagway AK 99840, USA
Hours: Open: May - Sept daily 8am - 6pm
From $ 55

For stunning views over Skagway and its environs, take a scenic drive along the road to Dyea and follow the turnoff to the Overlook.

The viewing platform at the Skagway Overlook takes in the town of Skagway, waterways and surrounding peaks dusted with snow.

Bring your camera and set it to panoramic to capture wide-angle shots of the Skagway River, and inlets and waterways like neighboring Smugglers Cove.

Tours heading to the White Pass summit take time so visitors can appreciate the views over Skagway from the Overlook observation platform.

The Skagway Overlook is around 2.5 miles (4km) from downtown Skagway, just off the road to Dyea.
Address: Dyea Road, Skagway AK 99840, USA
Hours: Open daily
From $ 55 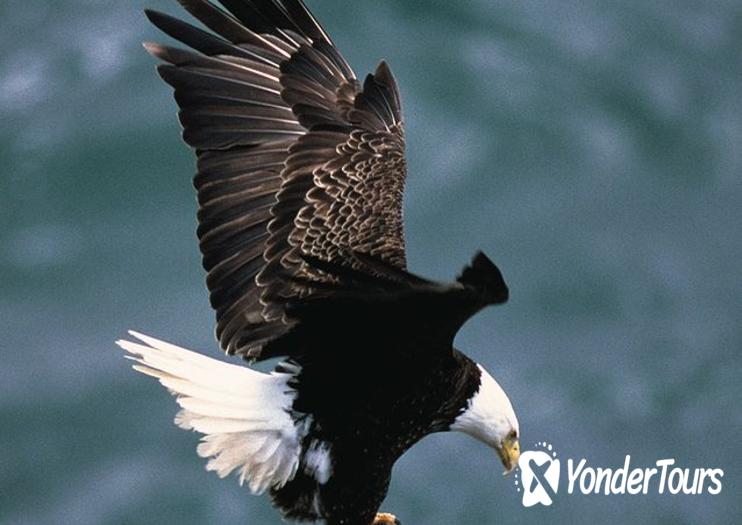 Bald eagles have a safe home at the Chilkat Bald Eagle Preserve. Created in 1982, the huge park protects the world’s largest collection of bald eagles and their habitat.

Natural salmon runs are also protected in the preserve, where the Chilkat, Kleheni, and Tsirku Rivers meet.

For the best views of the eagles, head to the Haines Highway by the river flats surrounding the Chilkat River. To ensure the eagles aren’t spooked by your presence, stay off the river flats themselves and keep to the area near the highway.

From October to February, the eagles are attracted to the wetlands by the spawning salmon. During these months around 3,000 bald eagles have been known to stay at the preserve; the number of year-round inhabitants is between 200 and 400.

As well as eagle viewing, a visit to the preserve might take you river rafting on the Chilkat River to spot beavers, brown bears, moose and waterbirds.

The Chilkat Bald Eagle Preserve is north of Haines on the Chilkat River. The park extends over 48,000 acres (19,200 hectares) of river flats.
Address: USA
Hours: Open daily
From $ 137