Things to Do in Long Beach

Choose from 5 Fun Things to Do in Long Beach Perched high above the city of Los Angeles, the Getty Center is home to a stellar art collection—with pieces spanning the ages from Renaissance to Pop Art—as well as Richard Meier’s cutting-edge architecture and serene, seasonally changing gardens. On clear days, visitors can enjoy breathtaking views of LA and the Pacific coast beyond.
The Basics
Even getting up to the Getty Center aboard the computer-operated tram is fun. From the sprawling arrival plaza, a natural flow of walkways, stairs, fountains, and courtyards encourages a relaxed pace between galleries, gardens, and outdoor cafés. Five buildings house collections of manuscripts, drawings, photographs, furniture, and decorative arts, and an assortment of pre–20th-century European paintings. Must-sees include Van Gogh’s Irises, Monet’s Wheatstacks, and Rembrandt’s The Abduction of Europa.
The Getty Center is one of LA’s most visited museums, so purchase tickets ahead of time to guarantee admission. City highlights tours stop here, often in combination with the Getty Villa or celebrity homes in Beverly Hills. If you’re interested in aerial views of the remarkable building, take a helicopter or plane tour of the area.
Things to Know Before You Go
How to Get There
The Getty Museum is located west of Hollywood. Metro bus lines 734 and 234 stop at the Getty Center entrance, at the intersection of Getty Center Drive and Sepulveda Boulevard. There is no street parking; paid parking is available in the Getty Center lot, which opens 30 minutes before the museum. Take the free tram from the street-level parking area to the top of the hill.
When to Get There
The Getty is open every day except Mondays and Thanksgiving Day, Christmas Day, and New Year's Day; check the website for opening hours. Late afternoon is a great time to visit if you want to beat the crowds, plus parking fees are reduced at this time—and the Cactus Garden is lovely in the afternoon light.
Special Exhibitions
Before visiting, check to see what special exhibitions or public programs are available. The museum is constantly showcasing new pieces from the collection or major works from around the world, and tickets can sell out way in advance on these special dates.
Address: 1200 Getty Center Dr., Los Angeles 90049, USA
Hours: Open Tues - Fri, Sun 10am - 5:30pm (Sat to 9pm)
Admission: Free
From $ 15 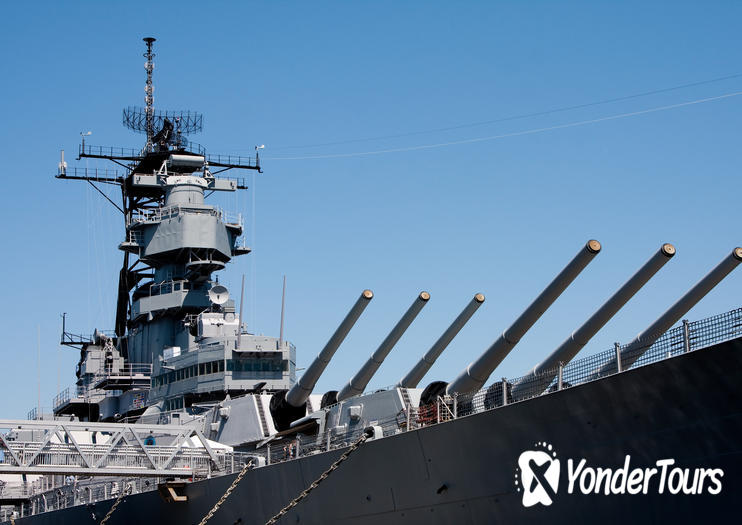 Once considered the world’s greatest naval ship thanks to its powerful weaponry, heavy armor, and advanced fire control systems, the USS Iowa served the U.S. Navy during World War II, the Korean War, and the Cold War. Today it’s docked in Los Angeles Harbor in San Pedro, California.
The Basics
USS Iowa visitors have their choice of several tours: a self-guided tour (just board the vessel and following an easy, well-marked path), a guided kid’s tour, a guided highlights tour, the Full Steam Ahead tour, and the Big Stick Tour, which offers the best behind-the-scenes access, including lunch in the captain’s or admiral’s cabin.
Whichever you choose, you’ll walk in the footsteps of President Franklin Delano Roosevelt, Winston Churchill, and President Reagan as you see where daily operations took place, where officers spent their free time, the galley, and the flying bridge. Go below deck to play an interactive combat game in the digital theater, then explore exhibits that reveal more about the ship’s fascinating history. Former military personnel are usually on hand to answer questions.
Things to Know Before You Go
How to Get There
The museum is located at Berth 87 at the Los Angeles World Cruise Port Terminal at the Port of Los Angeles, about 30 miles (48 kilomters) south of downtown Los Angeles. Take I-110 South to exit 1A, then turn onto North Harbor Boulevard. Paid parking is at the lot on 1st Street and Harbor Boulevard.
When to Get There
This site is open from 10am–5pm daily, except Thanksgiving and Christmas. Weekdays tend to be less busy than weekends; on some days, it’ll feel like you have the entire vessel to yourself. Fleet Week, when there are typically several free events planned, can be an exciting time to visit.
Oops! Wrong Target
The USS Iowa, escorted by three destroyers—including the William D. Porter, also known as the “Willie Dee”—was carrying President Franklin D. Roosevelt on Nov. 14, 1943. During a routine mock torpedo run, one crew member didn’t remove a crucial priming pin, which launched a torpedo toward the USS Iowa. Thankfully, the Willie Dee crew radioed to the Iowa, and the vessel made a safe, sharp turn to avoid impact.
Address: 250 S Harbor Blvd, Los Angeles, CA 90731, USA
Admission: Varies
From $ 96 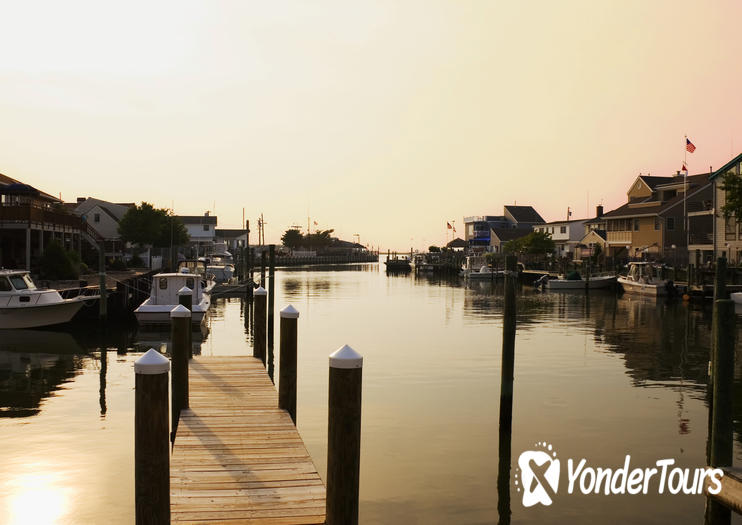 To see how Long Beach’s elite live, head to Naples. The neighborhood resides on three islands divided by canals, which are lined with beautiful million dollar homes. These canals open into Alamitos Bay and provide an array of fun water experiences. For a bit of romance, ride in an authentic Venetian gondola down the canals while sipping a glass or wine or beer (BYOB) and enjoying the scenery. For something a bit more adventurous, kayaking is also an option.

When visiting Naples, La Bella Fontana Di Napoli is a fountain in the center of the neighborhood that’s also a popular attraction. The structure was erected in 1971 and sits in a peaceful park that many say makes them feel as though they’re in Naples, Italy.

If you’re visiting during the holidays, Naples is well-known for its Naples Island Christmas Boat Parade. This annual tradition features small and large boats adorned in holiday decorations floating on the water.
Address: Naples, Long Beach, CA, USA
From $ 320 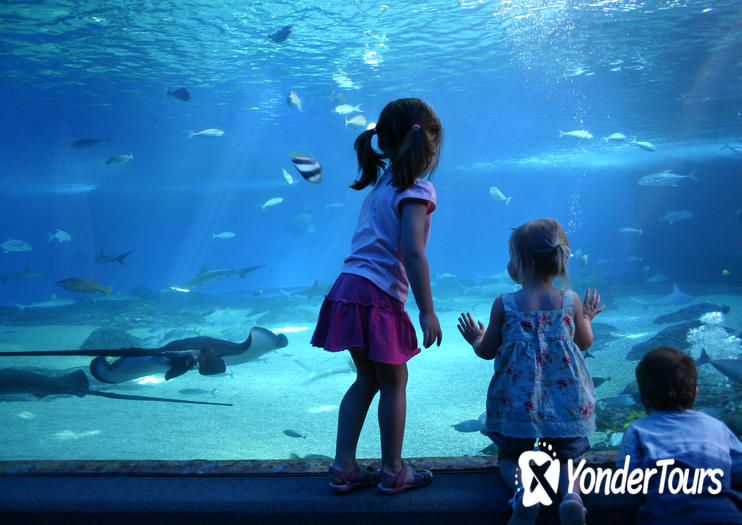 Aquarium of the Pacific

Sitting on Rainbow Harbor you’ll find one of Long Beach’s top attractions: Aquarium of the Pacific. Home to more than 11,000 aquatic animals and approximately 500 species, there is much to see throughout their 32 exhibits. In fact, many people arrive at opening time and don’t leave until closing. Get up close to playful seals and sea lions, visit a lagoon with more than 150 sharks, see ultraviolet sea animals against a black light, take in otherworldly jellyfish of all shapes and sizes and roam the numerous indoor and outdoor exhibits.

Many of the exhibits are also interactive, allowing you to pet fish, manta rays and even small sharks; feed birds in the Lorikeet Forest; and partake in tropical reef feedings. Check the schedule when you arrive to see what shows and lectures are going on for the day. If you’re traveling as a family, stop at the desk to pick up special worksheets and scavenger hunt-like tasks for kids to fill out while exploring the museum.

Along with taking in the exhibits visitors can partake in a number of special experiences at Aquarium of the Pacific. While a 4D movie tells the story of Sammy the Sea Turtle and his underwater friends, a Behind the Scenes Tour provides a sneak peek into daily operations at the aquarium. The attraction also offers a number of boat tours for whale watching, dolphin viewing and exploring the harbor. 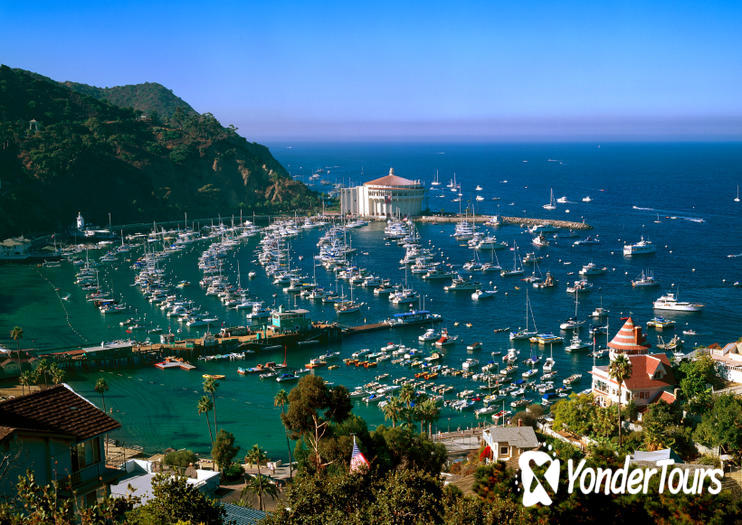 Santa Catalina—widely known as just Catalina—is a beautiful Southern California island just off the coast of Los Angeles. With rocky terrain, blue waters, and Mediterranean flair, it’s an idyllic escape from the City of Angels, and hard to believe that it’s only a 1-hour ferry ride away. Catalina’s only small town, Avalon, is home to boutique shopping, oceanfront dining, and harbor views. There are plenty of chances to get in or on the island’s stunning waters as well—if you can drag yourself of off the beach.
The Basics
Visitors seeking a whole Catalina-from-mainland package can take a full-day guided tour from Anaheim or Los Angeles, while independent travelers coming from LA can simply book ferry tickets online. Once you’re on Catalina, an Avalon scenic tour is the perfect introduction to the island. Food tours offer a delicious way to discover the unique eats and culinary culture of Catalina. If you’d like a peek at the underwater world but aren’t keen on getting wet, check out a glass-bottom boat tour.
Things to Know Before You Go
How to Get There
Ferries shuttle visitors to Catalina Island’s Avalon Harbor in just over an hour from Long Beach, Dana Point, San Pedro, or Newport Beach. Be sure to check out the coastal views as you leave port. If you’re day-tripping, be aware of the last ferry departure times. Segway and golf cart rentals or walking are the most common ways to get around the island.
When to Get There
Catalina enjoys Southern California sunshine year-round. Crowds are more likely during summer, with expanded ferry service through September. Winter months are typically less busy, though the climate is cooler.
Catalina for Adventurers
While it’s tempting to simply lounge on the island’s beaches, there is an array of outdoor activities for those seeking adventure. Snorkeling, biking, golfing, Segway tours, scuba diving, kayaking, camping, hiking, and parasailing are just some of the options readily available on Catalina. There is also a zipline eco tour in the hills behind Avalon.
Address: USA
From $ 74